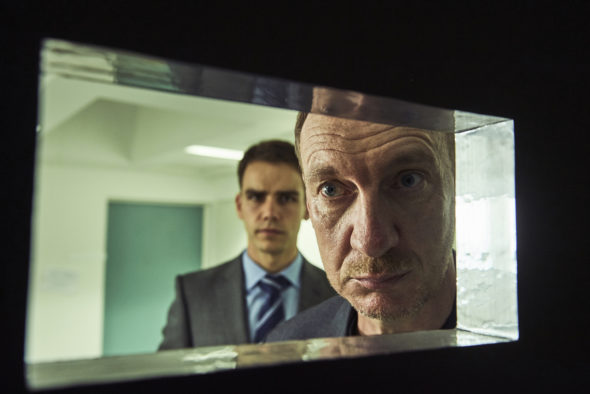 Can Tom and Kate beat their tech addiction in the first season of The Feed TV show on Amazon Prime? As we all know, the Nielsen ratings typically play a big role in determining whether a TV show like The Feed is cancelled or renewed for season two. Amazon and other streaming platforms, however, collect their own data. If you’ve been watching this TV series, we’d love to know how you feel about the first season episodes of The Feed here.

An Amazon Prime psychological thriller series, The Feed stars Guy Burnet, Nina Toussaint-White, Michelle Fairley, David Thewlis, Jeremy Neumark Jones, Clare-Hope Ashitey, Osy Ikhile, Shaquille Ali-Yebuah, Chris Reilly, and Jing Lusi. Written and executive produced by Channing Powell and based on the novel by Nick Clark Windo, the TV show focuses on our addiction to technology, our fear of what it’s doing to our brains, and our terror of having to live without it. In the near future, a high-tech implant connects our minds to “The Feed.” Every interaction, emotion, and memory can be shared instantly. Tom (Burnet) and Kate (Toussaint-White) are a young couple that’s trying to resist their addiction to tech. .

What do you think? Which season one episodes of The Feed TV series do you rate as wonderful, terrible, or somewhere between? Do you think that The Feed on Amazon Prime should be cancelled or renewed for a second season? Don’t forget to vote, and share your thoughts, below.

I loved the feed. Finished season. 1 In 2 days. Got very emotional about it and that’s not typical at all for me. Please make a season 2!!!

I love the feed. I couldn’t stop watching it. I finished season 1 in 2 days. Please give us more.

Brilliant show! Stayed up all night watching it. Do really hope many more series will be produced. Love it, will be recommending it to everyone!

Fabulous engaging show. I was seriously disappointed that there was no Season 2 immediately following Season 1. Good shows are few and far between in the last few years. The Feed is one that needs to be renewed for several more seasons. Excellent writing and acting. May take another season for viewers to appreciate the quality of it, just like Grimm. So don’t give up on it or viewers. I was never bored for a second. Please give us a Season 2.

Seasons two!!! We need to know what happened!!

This show is very well done. Different than other concepts and incredibly addictive to watch. I really hope there will be a second season!

Really hope there will be many more seasons! My husband love The Feed!!

PLEASE KEEP GOING WITH THIS SERIES! ONE OF MY FAVORITES! The feed is an amazing show!