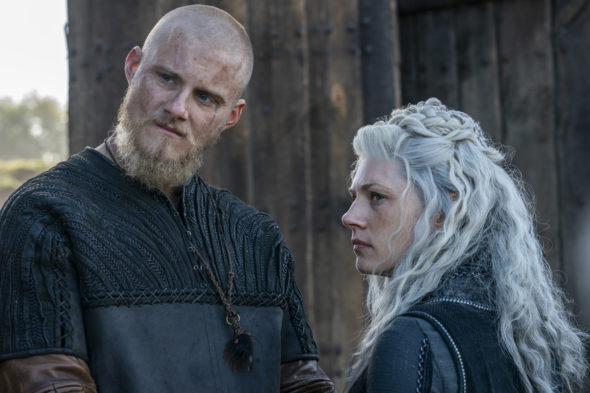 There’s no need to worry about the Vikings TV show being cancelled this time around. History has already announced that that the series ends with season six. While there won’t be a seventh season, work is underway on a Netflix sequel series. Will Vikings go out with strong ratings or has it burned out? Stay tuned.  *Status update below.

For comparisons: Season five of Vikings on History averaged a 0.46 rating in the 18-49 demographic and 1.90 million viewers.

What do you think? Do you still like the Vikings TV series on History? Should it have been renewed for a seventh season?

This was a great series all the way up through Ragnar’s death. After Ragnar dies the next two episodes were not bad but then it just gets totally ruined with ridiculous garbage! I can’t believe how bad the writing got pose Ragnar’s death. I pushed through season 5 episode 4 and then gave up!
Completely disappointed! It was a good series up until that.

Don’t let Flockie or Ragdar be dead. There was no body so they can still be alive. Flocki can’t die because He has to help rebuild everything

Vikings is one of the BEST SERIES I have watched…it’s right up their with Spartacus…we need MORE series like this..Vikings is AWESOME, and their needs to be more!!!!!

Yes I think one more season would have been great!Love the show

I think this views don’t reflect the quality of the series, i see how community fans of this serie is everyday bigger, i really dont understand this numbers…
For me, 100x better than got.

I watched the entire Vikings series a month ago. The show is suburb!

We disconnected our cable tv 7 months ago. I’m like many others which do not have cable TV which may influence the shows ratings.

I vote to keep this show in production and continue access on Netflix.