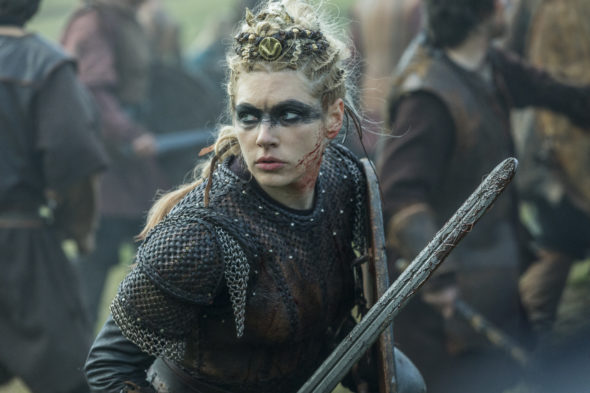 How well does Ragnar’s family further his dreams during the fifth season of the Vikings TV show on History? As we all know, the Nielsen ratings typically play a big role in determining whether a TV show like Vikings is cancelled or renewed for season six. Unfortunately, most of us do not live in Nielsen households. Because many viewers feel frustration when their viewing habits and opinions aren’t considered, we’d like to offer you the chance to rate all the season five episodes of Vikings for us here.

A History action-adventure series, the fifth season of Vikings stars Alexander Ludwig, Alex Høgh Andersen, Peter Franzén, Katheryn Winnick, Jordan Patrick Smith, Gustaf Skarsgård, and Jonathan Rhys Meyers. The period drama delves into the Viking warriors and their strange, ruthless world. Season five kicks off with Ivar the Boneless (Andersen) asserting his leadership over the Great Heathen Army, as Queen Lagertha (Winnick) reigns as over Kattegat. Meanwhile, after avenging their father’s death, the sons of Ragnar (Travis Fimmel) devise a new strategy. Surprising alliances and astonishing treachery rule the day, even as the Vikings aspire to rule the world.

What do you think? Which season five episodes of the Vikings TV series do you rate as wonderful, terrible, or somewhere between? Are you happy History renewed Vikings  for a sixth season? Don’t forget to vote, and share your thoughts, below.

Please don’t cancel the show!! There are only so many shows on tv that are worth watching anymore. I would be very very sad!

Vikings is a great show I can’t wait for more

Ever since they got rid of Ragnar this show has gone down hill. This show was all about Ragnar. How do you get rid of your main character when the shows in it’s prime? The ratings have taken a nose dive. What a stupid move by Hirst. Glad the show will end soon.

Love this series sooo much, bought all the complete seasons so far.
Looking forward to season 6 to start

I love the show “Vikings”, excited for the 6th Season to begin.

I LOVE this show. The acting is superb, and it is totally unpredictable. I cannot wait for the next season. I have seen them all !

One of the best shows on.