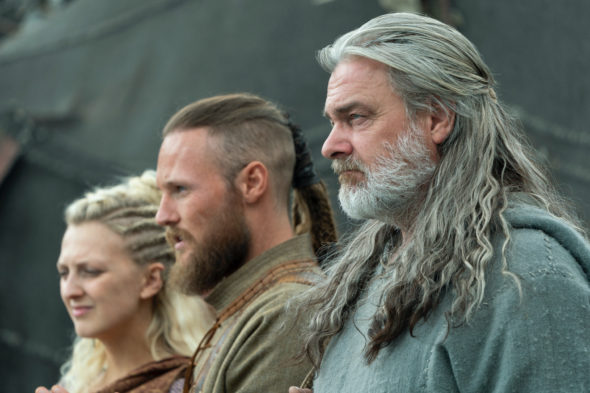 Well, the long wait is finally over. History has quietly announced that the final episodes of Vikings will begin airing on Saturday, June 5th, at 8/7c.

An action-adventure series, the sixth season of Vikings stars Alexander Ludwig, Alex Høgh Andersen, Peter Franzén, Katheryn Winnick, Jordan Patrick Smith, and Marco Ilsø. Danila Kozlovsky, Georgia Hirst, Adam Copeland, Ferdia Walsh-Peelo, Ragga Ragnars, Steven Berkoff, and Eric Johnson have recurring roles. The period drama delves into the Viking warriors and their strange, ruthless world. Season six picks up after the battle which has left Bjorn (Ludwig) victorious and a hero to the people who have been under the tyrannical rule of Ivar (Høgh) for so long. As the new leader of Kattegat, Bjorn struggles to fill his late father’s shoes as king, while facing several dilemmas and wrestling with the idea that power overshadows morals. Meanwhile, Ivar, searching for a new path to separate him from his past, is seen traveling along The Silk Road eventually leading him to Russia.

Netflix has already ordered Vikings: Valhalla, a spin-off to the Vikings show. It will take place a century later and will tell the story of well-known Norsemen like Leif Erikson, Freydís Eiríksdóttir, Harald Hardrada, and the Norman King William the Conqueror.

What do you think? Have you enjoyed the Vikings TV series? Will you be watching the final episodes on History or, have you already seen them on Amazon Prime Video or Hulu?

I’m sad that they didn’t continue one more season. What happend to Torvi and Ubbe? Or Ivar and his child? And king Fine hair?

Alex Hogh Anderson was the star of the show,. He out acted the entire cast. Tremendous performance!

Will season 6 be shown again on the history Channel