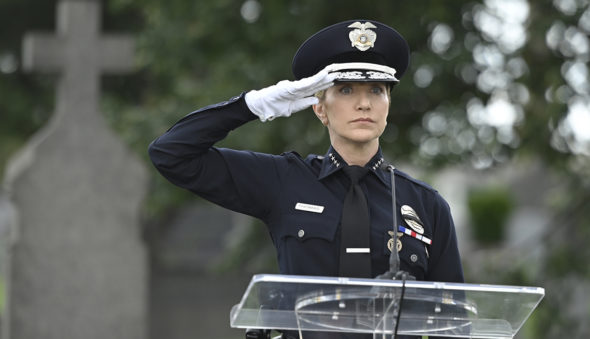 Tommy won’t be back on patrol next season. CBS just announced that the network has cancelled the cop drama and won’t be ordering a second season for the 2020-21 broadcast season.

Airing on Thursday nights, the first season of Tommy averages a 0.49 rating in the 18-49 demographic and 4.85 million viewers. The cancellation doesn’t come as much of a surprise as the drama is the network’s lowest-rated scripted series.

The 12th and final installment of Tommy airs tomorrow night.

What do you think? Do you watch Tommy? Would you have watched season two on CBS?

I wish Tommy show was renewed. Enjoyed that show especially with Edie Falco.

I’m sad to see the show canceled. It didn’t even get off the ground.

I think you need to reconsider ! Tommy’s cool! As SENIOR CITIZENS , YOU CAN COUNT ON US TO BE HOME AT NIGHT!!

I am 65 which is not part of the demographic….hmmmm….sure your stats are correct? I loved this show and would have definitely have watched a season 2 and future seasons….it felt real and empowering….I am a woman and I am not gay….you people need to get with the times….day to day lives are changing.

No way Tommy should have been cancelled. The storylines were so “today”. With a fine actor such as Edie Falco, it deserved another season.