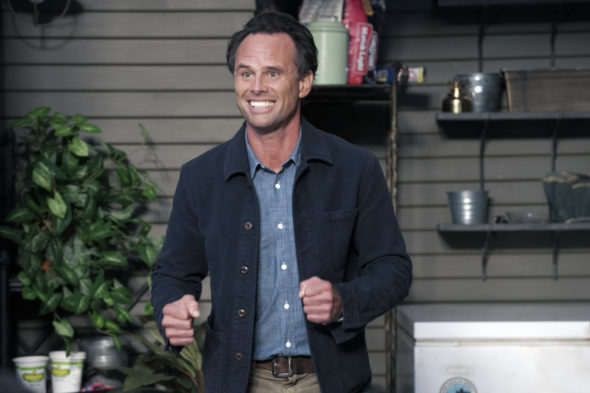 Will the numbers improve in year two? Has The Unicorn TV show been cancelled or renewed for a third season on CBS? The television vulture is watching all the latest cancellation and renewal news, so this page is the place to track the status of The Unicorn, season three. Bookmark it, or subscribe for the latest updates. Remember, the television vulture is watching your shows. Are you?

Airing on the CBS television network, The Unicorn stars Walton Goggins, Rob Corddry, Michaela Watkins, Omar Miller, Maya Lynne Robinson, Ruby Jay, Makenzie Moss, and Devin Bright. Following the loss of his wife, Wade (Goggins) is now the single parent to their adolescent daughters, Grace (Jay) and Natalie (Moss). With the encouragement of his kids and close friends like Forrest (Corddry), Delia (Watkins), Ben (Miller), and Michelle (Robinson), Wade decides to try dating again. To his amazement, Wade is told that he’s considered a hot commodity in the dating world and the perfect single guy, aka a “unicorn”. He’s employed, attractive, and has a proven track record of commitment. Thanks to the support of his little girls and his friends, Wade is hoping to find happiness again and puts himself and his healing heart out into the world.

The second season of The Unicorn averaged a 0.45 rating in the 18-49 demographic and 3.61 million viewers. Compared to season one, that’s down by 37% in the demo and down by 36% in viewership. Find out how The Unicorn stacks up against other CBS TV shows.

Will CBS cancel or renew The Unicorn for season three? Last season, CBS cancelled two sitcoms (Carol’s Second Act and Man with a Plan) but kept The Unicorn which had only slightly better ratings. The Unicorn’s ratings didn’t improve in year two but it’s produced by CBS Studios and the network hasn’t produced any breakout sitcoms this season. So, I think there’s a good chance the show will be renewed. I’ll update this page with breaking developments. Subscribe for free alerts on The Unicorn cancellation or renewal news.

What do you think? Were you hoping that The Unicorn TV show would be renewed for a third season? Are you sorry that CBS cancelled this TV series, instead?

I hate to hear that The Unicorn has been cancelled! I just loved it.

Just finished binging season one of unicorn on netflix. Loved it! Can’t wait until season 2 on netflix. Maybe better if always on netflix if ratings not good on cbs. I think too many good shows on tv at same time and more fun to binge watch in netflix. Way if world now. Hope to see unicorn back on!!!!!!!!!

Love ‘The Unicorn’. I cancelled my subscription to CBS’s ParamontPlus after learning that CBS has cancelled The Unicorn. I sure hope another network will pick-up this wonderful Show.

I didnt even know this until today! CBS cancelled The Unicorn but brought back B-Positive and Bob heats Abishola????????? OMG what planet am I on! They will have to start airing BBT reruns to fill their programming! Good for you for cancelling that subscription!

This was my favorite show on TV!!! Finally a relatable group of friends with real life issues. I am so bummed, loved this show!