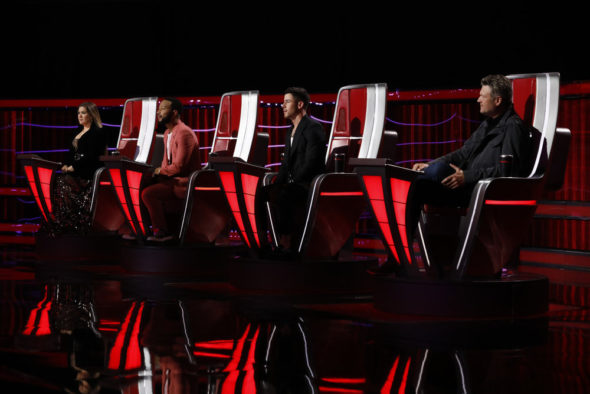 The Voice is seeing a bit of a cut next season. NBC has decided to reduce the series to one cycle for the 2021-22 season. The competition series will air in the fall (season 21) but it will not return in the spring as it usually does. Ariana Grande is joining team leaders Kelly Clarkson, John Legend, and Blake Shelton for the singing competition in the fall.

“Going into the 21st cycle in the fall, The Voice remains one of the most popular shows on television and we want to keep it that way. We want to eventize this iconic series. We think The Voice will be on NBC for a very long time to come and we believe the best way to protect the brand, while also super-serving fans is to produce one amazing cycle this year.”

A premiere date has not been announced for the fall edition of The Voice.

What do you think? Are you a fan of The Voice? Are you surprised by NBC’s decision to cut the series to one cycle next season?

I don’t like the new format. Always looked forward to both seasons. Bad idea. Tv has such a limited poor lineup now.

I don’t understand this decision. It makes no sense. It’s getting ridiculous watching coaches spar without an audience. It’s not funny anymore. It’s more about their egos than a singing competition. Please go back to the previous format

I’m ok with it just don’t get rid of this show, it is my all time FAVORITE TV SHOW! Love love love it!

Love The Voice,at least they are keeping it on!

I am very upset they won’t be on in the spring . I so look forward to that . I just cannot believe it !

Very disappointing! I guess NBC didn’t recognize the impact on Season 20 of only having it air on Mondays until live shows.
If going to one cycle, why not cancel it now? Plus, the 10th Anniversary Season was less entertaining than Season 19 not being in studio – like the show was just going through the motions. Listening to coaches spar or make comments about performances isn’t entertaining without a live audience. There could have been some live (or at least Zoom) interviews or performances with past coaches instead of video clips or performances by guest mentors.

Not happy about no spring show!

Well I’m not happy about it! I’ve been disappointed that the live shows only last a few weeks. But now I’m even more upset that we won’t have The Voice to look forward to next spring.

It must be the beginning of the end of the show. They have been cutting back more and more. It’s very upsetting when they show what’s going to happen (a teaser), then show it then constantly show what has already happened.

big bummer this season started one circle Monday night basically how stupid use to watching every Monday and Every Tuesday look forward both days night so good.