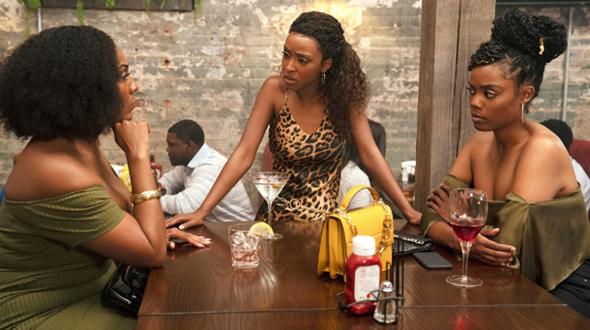 These friends will be back on BET. The Sistas TV show has been renewed for a fifth season on the cable channel. The fourth season is currently on hiatus and will resume on June 29th.

Airing on Wednesday nights, the fourth season of Tyler Perry’s Sistas currently averages a 0.24 rating in the 18-49 demographic and 1.01 million viewers. Compared to season three, that’s up by 2% in the demo and up by 7% in viewership in the live+same day ratings (including DVR playback through 3:00 AM).

Today, BET also renewed Tyler Perry’s The Oval for a fourth season. Production on both series’ new seasons will begin this spring.

What do you think? Are you a fan of the Sistas TV series? Are you glad to hear that this Tyler Perry show has been renewed for a fifth season?

I’m glad Sistas has been renewed for a 5th season although I’m not surprised since Tyler Perry is a partner with BET and BET+is a collaboration of BET and Tyler Perry Studios so chances are the 5th season was guaranteed. Plus there are too many unanswered questions to be addressed that with Tyler Perry’s enjoyment of slow moving storylines will not be settled in season 4B. I really just watch because of the Zatima relationship and storyline. I used to enjoy Danni and Preston before Danni showed she couldn’t handle a real man. Danni and Preston should have been the… Read more »

I totally agree with you! Danni wasn’t ready to put her biases aside and date a a person who culturally grew up White American. I think Preston clearly knew how to date other black women after Danni, it’s sad because I wanted Danni to be happy and in love, but atlas we are our own wore demise at times…

I really enjoy SISTAS, can someone tell Tyler Perry to put it on DVD and Blu-ray.

Can’t wait for the show Sister’s to return

This is like the Best show I ever seen, I Love it