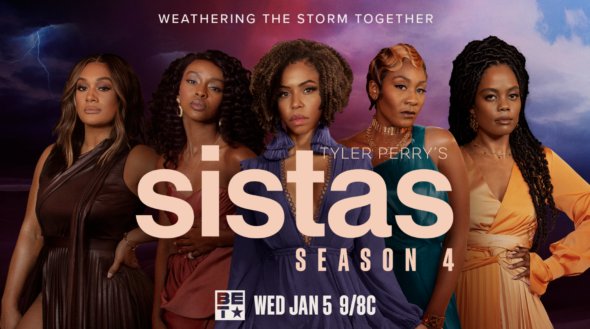 Last year, the Sistas TV show was BET’s top-rated scripted series. Will it continue to be a solid performer and be renewed for season five or, could it be cancelled instead? Stay tuned.  *Status Update Below.

What do you think? Do you like the Tyler Perry’s Sistas TV series on BET? Should it be cancelled or renewed for a fifth season?

*3/23/22 update: Tyler Perry’s Sistas has been renewed for a fifth season on BET.

Sistas was good in the beginning when it was new. The dialogue is awful, and the storylines get dumber and dumber as time goes on. Hayden having a hard on for Zac all because Fatima don’t want him when he was the one that started it all. Zac sitting in jail for child support over a kid he aint know he had and no paternity test. I call BS on that one. Zac aint got no kid. This was something tossed in there. Gary still being manipulative and Karen mad that her baby is possibly Aaron baby and mad bc… Read more »