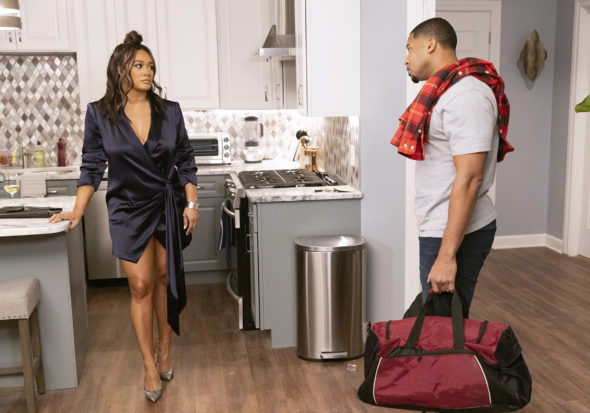 Tyler Perry is expanding his Sistas universe with another series. A spin-off of the popular drama is headed to BET+. Tyler Perry’s Zatima will feature Devale Ellis and Crystal Renee Hayslett and follow their characters Zac and Fatima as they deal with the ups and downs of their relationship.

BET+ revealed more about the spin-off in a press release.

“Today, BET+ and Tyler Perry Studios announced the greenlight of the new BET+ original drama Tyler Perry’s Zatima, a spin-off from the #1 cable scripted series among Black viewers, Tyler Perry’s Sistas. The 10-episode one-hour series follows popular characters ‘Zac,’ played by Devale Ellis and ‘Fatima,’ played Crystal Renee Hayslett, as they navigate the ups and downs of their relationship. Zatima marks the second spin-off from a Tyler Perry top-rated linear show to get greenlit by BET+, the leading streaming service for Black audiences. Executive produced, directed, and written by Tyler Perry, Zatima started production at Tyler Perry Studios this week and will premiere in 2022 on BET+.

“We are continuing to strengthen our investment in quality programming, and our partnership with Tyler Perry has a proven track record of super-serving our audience,” said BET’s President and CEO, Scott Mills. “We look forward to unlocking crossover viewership opportunities between our linear platform and our streaming service one of our strongest series, Sistas. With Zatima joining our expanding roster of BET+ originals, BET is committed to giving viewers more of the compelling content they love and expect across our platforms.”

What do you think? Are you excited to see a new Tyler Perry series on BET+?

I’m so excited to see what’s going to happen with Zatima and zak. I really think they make a Beautiful Couple.

Why BET+? Many of us don’t have this and can’t afford to add it. Please reconsider this. I am so broken up and disappointed. Help Tyler!

I love them together. They are the show.

I’m for Zac and Karen, they been thru alot and real love stays together. Fatima should have left him alone once she found out he was Andi best friend , boyfriend. That’s what true friends do

You know it doesn’t work that way.

Karen is confused and doesn’t know what she wants in life. She treated him like dirt. Bye Bye Karen

I’m so excited to hear this news!! I was so scared Tyler was going to put Zach back with Karen. Thank you Tyler for seeing that chemistry between Zach and Fatima and giving them a spinoff, this is huge!!!

I just ❤ ❤❤ Zac & Fatima.
This is one of the Best things Tyler Perry could have done ❤

I’m excited to see Zack and Fatima get their own show. I’m not happy it is on B.E.T. +. EVERYBODY DOES NOT DO STREAMING. IT IS ASHAME.

We regular folks put them in #1 ranking and now you are taking them away. I have Bet+

Zatima is the best actress on sistas. She is so natural. I’m so glad she didn’t miss her calling. Everyone can see her talent

Excited to see new Tyler Perry’s series YES offcuz, but “Zatima” really? Is there that much energy, emotions between the two or is it just me? What I see BTW the two is just pleasure, fun, all they do is have sex and that is it