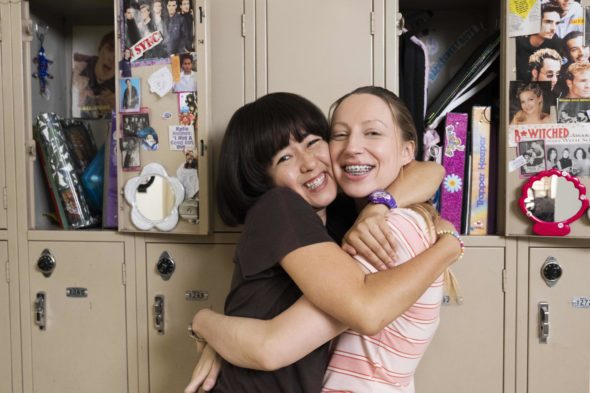 TV show description:
From co-creators and writers Maya Erskine, Anna Konkle, and Sam Zvibleman, the PEN15 TV show is an adult comedy about life as a middle school student, in the year 2000. Erskine and Konkle star as 13-year-old fictionalized versions of themselves, Maya Ishii-Peters and Anna Kone (respectively) and play off actual adolescent actors.

Maya and Anna are nothing if not outcasts, but in the year 2000, the world is changing even faster than usual for these young teens. Suddenly, what begins as a banner day can go to hell in a stroke of a gel pen, or in an AIM chat.

The girls always mean to have each others backs, but when things like cigarettes, boys, drugs, the internet, school dances, and puberty come into play, anything can happen.

What do you think? Do you like the PEN15 TV series? Should this Hulu TV show be cancelled or renewed for another season?

This is my favorite show! So many throwback memories to my youth! Season 1 aired on my birthday. So excited for season 2!

Omg! I am so in love with this show! It takes me directly back to middleschool in the late 90s! I forgot how terrible and wonderful it all was! I love this show!

So the show is the “leet” way to spell the male phalus? I imagine this won’t go over well for anyone that was old enough to be online in the 2000’s.

Sorry Kid. PEN15 was around way before leet speak. Life newbs these days.