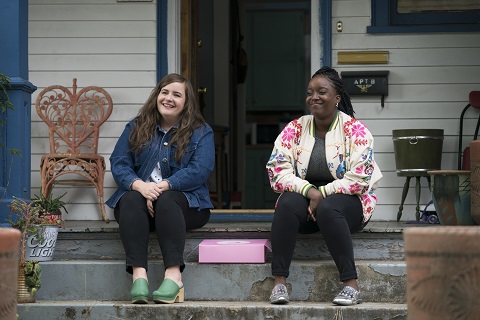 Hulu has a lot in store for the new year. The streaming service just released previews for their winter 2019 lineup, which includes new seasons of Future Man and Marvel’s Runaways.

Synopsis: The Runaways have left their homes (and evil parents) behind and now have to learn to live on their own. As they scavenge for food, search for shelter, and take care of one another, our kids begin to realize that, for better or worse, they’re stuck with each other. And it’s up to them to take down PRIDE once and for all. But someone sent a mysterious message to Jonah… Is there a mole in the Runaways? Meanwhile PRIDE is focused on finding their children, and Jonah has his own dangerous plan in mind.

Synopsis: In the era of “self-care” mania, a group of millennial friends gather for a girls’ night reunion on New Year’s Eve to reconnect and reminiscence. But as they begin to rehash old memories and revisit an old party game of “Never, Have I Ever,” gripes and secrets they’ve been harboring manifest in nefarious and surprising ways.

Synopsis: Season two picks up in 2162, and Josh, Wolf, and Tiger learn that their season one mission to stop the cure from getting out didn’t work. In this timeline, Stu Camillo is now in power, having created the cure, and launched a plan to relocate humanity to Mars. A shadowy organization called the Pointed Circle seeks to recruit Josh to take Stu down – but are they the good guys, or is Stu? As Wolf quickly acclimates to the strange customs of this time, Tiger struggles with her Biotic identity and searches for an escape. Josh unites the team in an epic plan to save the world, but their time-traveling catches up to them, and they must reckon with their choices and what to do next.

INTO THE DARK: DOWN
Premiere Date: Friday, February 1 (Episode 5)

Crew: Written by Kent Kubena and directed by Daniel Stamm

Synopsis: A pair of office of workers get trapped in an elevator over a long Valentine’s Day weekend, but what at first promises to be a romantic connection turns dangerous and horrifying in this Blumhouse mash-up of rom-com and horror film genres.

Synopsis: PEN15 is middle school as it really happened. Maya Erskine and Anna Konkle star in this adult comedy, playing versions of themselves as thirteen-year-old outcasts in the year 2000, surrounded by actual thirteen-year-olds, where the best day of your life can turn into your worst with the stroke of a gel pen.

Synopsis: This is the tale of celebu-chef, Peter Rake, who tries to escape a recent wave of negative tabloid exposure by retreating to his family’s vacation estate in the woods. But the ghosts of Peter’s past are everywhere and debts will be settled. Soon, he realizes that a woman’s place is anywhere that she chooses to be.

Synopsis: From Executive Producers Lorne Michaels and Elizabeth Banks comes Shrill, a comedy series starring Aidy Bryant (Saturday Night Live) as Annie, a fat young woman who wants to change her life – but not her body. Annie is trying to start her career while juggling bad boyfriends, a sick parent, and a perfectionist boss.

Synopsis: The Act is a seasonal anthology series that tells startling, stranger-than-fiction true crime stories. The first season follows Gypsy Blanchard, a girl trying to escape the toxic relationship she has with her overprotective mother. Her quest for independence opens a Pandora’s box of secrets, one that ultimately leads to murder.”

What do you think? Do you subscribe to Hulu? Which shows will you watch in 2019?