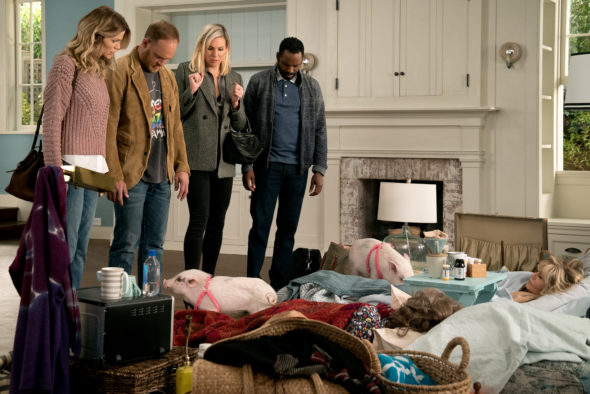 A Netflix comedy TV series, Grace and Frankie stars Jane Fonda, Lily Tomlin, Martin Sheen, Sam Waterston, June Diane Raphael, Baron Vaughn, Brooklyn Decker, and Ethan Embry. Retired businesswoman Grace Hanson (Fonda) and hippy artist Frankie Bergstein (Tomlin) have their lives upended, when their divorce-lawyer husbands, Robert Hanson (Sheen) and Sol Bergstein (Waterston), reveal they are in love and want to marry each other. While the women have never had much in common, they wind up moving in together, at least until they find their footing. As their bond solidifies, Grace and Frankie form a new sort of family, replete with laughter, tears, ice cream, booze, and plenty of other “mood enhancers,” to smooth their uncharted, sometimes rocky path.

We don’t have to binge the fifth installment, wondering whether Netflix will cancel or renew Grace and Frankie for season six. The renewal came in early, just a couple of days ahead of the season five release date. Now the question remains whether that sixth season will lead to more, or if it will be the final chapter. I’ll stay on top of press releases and industry news and update this page with breaking developments, as we figure things out. Subscribe for free alerts on Grace and Frankie cancellation or renewal news.

What do you think? Are you glad that the Grace and Frankie TV show was through season six? How would you feel if Netflix had cancelled this TV series, instead?