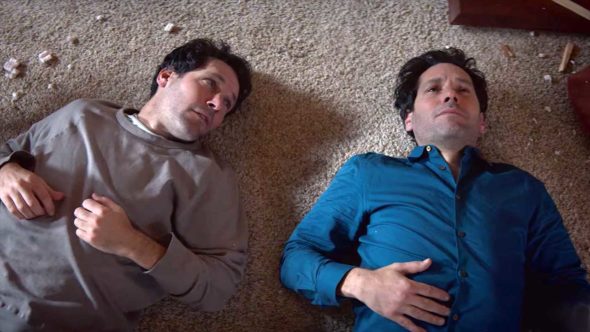 A Netflix comedy series, Living with Yourself stars Paul Rudd and Aisling Bea with Alia Shawkat, Desmin Borges, Karen Pittman, and Zoe Chao in recurring roles. Miles Elliot (Rudd) is a copywriter at Pool Marketing and is unfulfilled by his ordinary life and job. A co-worker tells Miles that he can change his life by visiting the very expensive Top Happy Spa. At the spa, Miles falls asleep and wakes up buried in a forest. He manages to dig himself out of the grave and make his way home where he finds his wife, Kate (Aisling), with another man that looks just like him. His doppelganger is a new and improved version, revealing that Miles’ own worst enemy is actually himself.

What do you think? Which season one episodes of the Living with Yourself TV series do you rate as wonderful, terrible, or somewhere between? Do you think that Living with Yourself on Netflix should be cancelled or renewed for a second season (possibly with a new cast)? Don’t forget to vote, and share your thoughts, below.