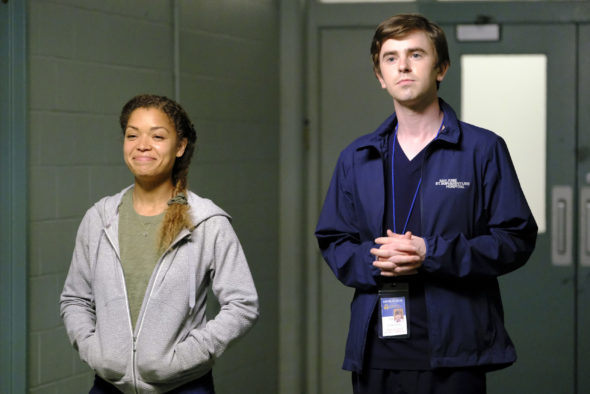 The Good Doctor is seeing some big changes to the cast for its fifth season. Antonia Thomas (above, left) has departed the ABC medical drama. She has played Dr. Claire Brown since the series began, but her character departed in last night’s finale.

Thomas said the following about her decision to exit the ABC drama, per Deadline:

“You know what, Nellie, it was a really, really difficult decision, and leaving, I have to say, is a bittersweet thing for me because the last four years have been absolutely incredible. I feel so lucky and basically indebted to David Shore and the writers for having the experience to play Claire, who has just been a wonderful, wonderful character to explore, so layered and complicated and flawed, the kind of character that I think an actress dreams to be able to play. I think, ultimately, for me, it’s about coming to the point where I think we’ve really run the gamut of different things that Claire can have gone through, and I’m now really excited to explore different creative opportunities. For me, as an actress, having versatility and creativity has been something that’s been really, really important. I’ve come from the British system where you play a role, you film it for a couple of months because seasons are only six episodes long, and then you can do something else, and I think after dedicating four years to Claire and her journey and really, really exploring the character, I am just now ready to try something new, ultimately.”

With Thomas exiting the series, the cast has some room for a new addition. Per a Deadline report, Osvaldo Benavides is joining the cast of The Good Doctor full-time as a series regular. He first appeared in the two-part season four finale. The following was revealed about his character:

“Benavides plays Dr. Mateo Rendón Osma, an incredibly skilled trauma surgeon, who has spent many years working in Guatemala for a Doctors-Without-Borders type of organization. But Mateo hasn’t always been a hero; some rash actions during his residency will be back to haunt him and could complicate things.”

What do you think? Were you shocked by Thomas’ exit from The Good Doctor? Are you excited to see Benavides next season?

I really really loved Claire Brown role…I mean I truly understand Antonia Thomas decision but I loved her in this role…don’t know how I feel bringing in another male in the mix…I think she should have been replaced by another female doctor…I’m will miss her role she play….so sad

Say it isn’t so!!! I loved her character. Hope she decides to come back later in the season.

I love this show, but sure will miss Claire’s character. Don’t know about the new guy but there is always someone coming and going on this series. The off and on romantics are ludicrous. They all seem to be either breaking up or getting back together. This seems juvenile with the cast.

So sorry to see Antonia Thomas leave the show… Really like Claire… Maybe she will come back later….

I personally will miss Clair, she was such an important part of the show.

Will miss Claire badly. She was a fave. But how this group hooks up romantically with each other is more than a bit far fetched. We don’t have to have bedroom drama with a side of interesting medicine. Will wait to see how the arrest warrant new guy turns out.

Was shocked! Didn’t see that coming!

I was shocked too.
I knew the new guy would show up at some point but not this quick.

Show burnt itself out in the first season. Now it is almost as bad as New Amsterdam.

Too bad leaving this show great characters and actress big bummer look forward new season always getting replace on every show take over ridiculous my opinion.

What are you trying to say?