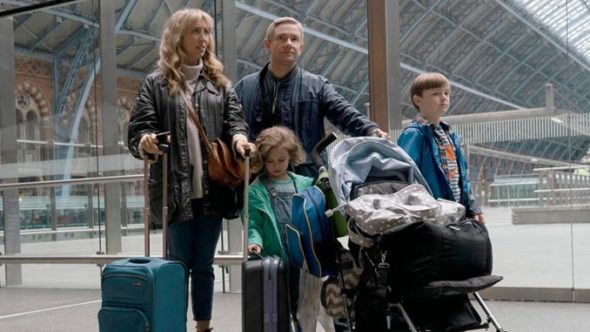 TV show description:
An irreverent and honest comedy series, Breeders explores the paradox that every parent knows but will never admit — you would willingly die for your children, but quite often you also want to kill them.

Paul (Freeman) is a caring father who’s in the process of discovering that he’s not quite the patient man that he thought he was. His parenting partner is Ally (Haggard). She’s a nurturing mother, a loving wife, a loyal daughter, and a skilled businesswoman but sometimes, something out of her control throws everything out of whack.

Paul and Ally juggle full-time careers, aging parents, a mortgage, upheavals in their relationship, and the unenviable curveballs of parenting their young children — anxious seven-year-old Luke (Wakeman) and Ava (Eyles), a happy and spirited four-year-old.

When Ally’s estranged father, Michael (McKean) appears on their doorstep, the family essentially takes on a third child — but this one comes with baggage and opinions. Ally’s mom, Leah (Gonet), is glamorous and unreliable and the polar opposite of her daughter.

Meanwhile, Paul’s own parents — happily married Jackie (Bacon) and Jim (Armstrong) — are on hand to help out with the kids. Unfortunately, their generation does parenting a little differently.

What do you think? Do you like the Breeders TV show? Do you think it should be cancelled or renewed for another season?

Awsome series, i just love it , hopefully i will see a lot more like a modern family

This show has great, tongue-in-cheek comedy. (And, thank goodness, no laugh track!). Love this kind of subtle,
“If-you-miss-it-you-miss-it” humor.

does anyone know the artist of the closing credits’ music for this show? thanks in advance 🙂

Im looking for the same musicmate