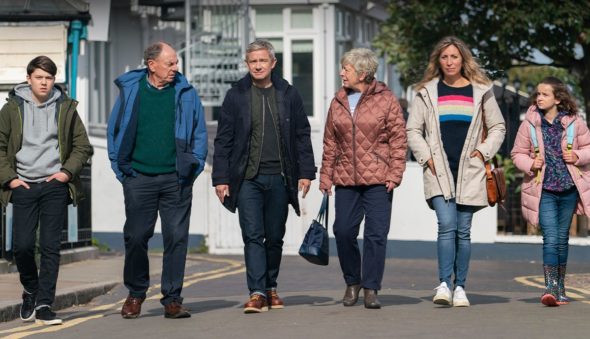 Can Paul and Ally survive these new challenges? Has the Breeders TV show been cancelled or renewed for a third season on FX? The television vulture is watching all the latest cancellation and renewal news, so this page is the place to track the status of Breeders, season three. Bookmark it, or subscribe for the latest updates. Remember, the television vulture is watching your shows. Are you?

Airing on the FX cable channel, the Breeders TV show stars Martin Freeman, Daisy Haggard, Alex Eastwood, Eve Prenelle, Joanna Bacon, Alun Armstrong, and Stella Gonet. The show explores the paradox that every parent knows but will never admit — you would willingly die for your children, but quite often you also want to kill them. Paul (Freeman) is a caring father who discovers that he’s not quite the patient man that he thought he was. His parenting partner is Ally (Haggard), a nurturing mother, loving wife, and a skilled businesswoman who has everything under control until it’s not. In season two, son Luke (Eastwood) is now 13 years old and daughter Ava (Prenelle) is 10, serving up brand new challenges for their parents. Luke’s increasing anxiety and Ava’s growing independence add some new and uncharted complications into the existing chaotic mix of stretched resources, lack of time, and the fine art of winging it while looking like you know what you’re doing. Paul’s parents, — Jackie (Bacon) and Jim (Armstrong) are older too, as is Ally’s mother Leah (Gonet), leading Paul and Ally to find that they now have to parent the generation above them as well as the generation below.

The second season of Breeders averaged a 0.07 rating in the 18-49 demographic and 216,000 viewers. Compared to season one, that’s down by 27% in the demo and down by 9% in viewership. Find out how Breeders stacks up against other FX TV shows.

Will FX cancel or renew Breeders for season three? Though the traditional ratings are low, my sense is that this comedy doesn’t cost a lot to produce and FX will order a third season if the cast and creators want to make it. I’ll update this page with breaking developments. Subscribe for free alerts on Breeders cancellation or renewal news.

5/28/21 update: Breeders has been renewed for a third season on Sky and FX.

What do you think? Are you glad that the Breeders TV show has been renewed for a third season? How would you feel if Sky and FX had cancelled this TV series, instead?

I Love this show! Great hilarious reality-based And absurd comedy as well as an intensely loving relationship