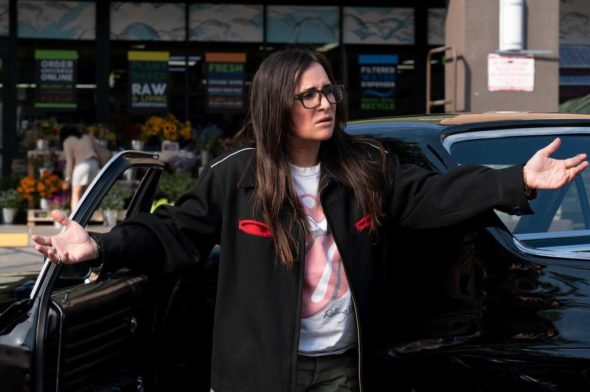 What does the future hold for Sam? Has the Better Things TV show been cancelled or renewed for a sixth season on FX? The television vulture is watching all the latest cancellation and renewal news, so this page is the place to track the status of Better Things, season six. Bookmark it, or subscribe for the latest updates. Remember, the television vulture is watching your shows. Are you?

Airing on the FX cable channel, the Better Things TV show stars Pamela Adlon, Mikey Madison, Hannah Riley, Olivia Edward and Celia Imrie. Season five focuses on “the road ahead” for its unconventional, unfiltered heroine, Sam Fox (Adlon), so devoted to her life as a working actor and single mother of three that she’s left little time for that one elusive thing: herself. As she navigates three daughters, each coming of age; the challenges of her chosen career; and her mother’s increasing signs of aging (as well as her own), Sam embraces each moment, and each member of her family, with a fierce love, raw honesty and biting humor. As each of the Fox women come of age into the next phase of their life, they are inspired to reevaluate themselves, learn from the past and find their own direction. Guests in season five include Lena Waithe, Ron Cephas Jones, Danny Trejo, Marty Krofft, Clive Russell, Casey Wilson, Rainbow Sun Francks, Angela Kinsey, Kevin Michael Richardson, Nelson Lee, Lennon Parham, and Usman Ally.

The fifth season of Better Things averages a 0.05 rating in the 18-49 demographic and 154,000 viewers. Compared to season four, that’s down by 51% in the demo and down by 48% in viewership in the live+same day ratings (including DVR playback through 3:00 AM). While these numbers don’t include further delayed or streaming viewing, they are a very good indicator of how a show is performing, especially when compared to others on the same channel. There can be other economic factors involved in a show’s fate, but typically the higher-rated series are renewed and the lower-rated ones are cancelled. Find out how Better Things stacks up against other FX TV shows.

We don’t have to wonder if FX will cancel Better Things since season five is the end. Could the characters return someday? I think there’s a good chance that they might. Subscribe for free alerts on Better Things cancellation or renewal news.

What do you think? Do you think that the Better Things TV show should be ending or renewed for a sixth season on FX?