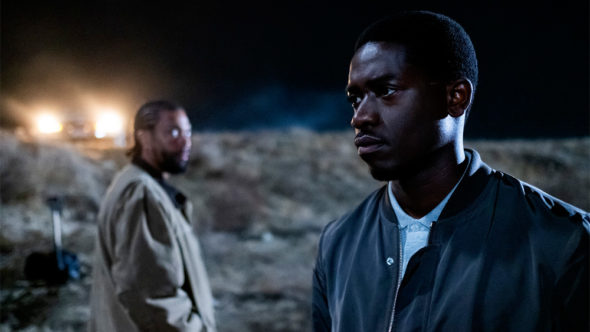 Can the Saint family survive? Has the Snowfall TV show been cancelled or renewed for a sixth season on FX? The television vulture is watching all the latest cancellation and renewal news, so this page is the place to track the status of Snowfall, season six. Bookmark it, or subscribe for the latest updates. Remember, the television vulture is watching your shows. Are you?

Airing on the FX cable channel, the Snowfall TV show stars Damson Idris, Carter Hudson, Sergio Peris-Mencheta, Michael Hyatt, Amin Joseph, Angela Lewis, Isaiah John, Alon Moni Aboutboul and Devyn Tyler. Unfolding in 1980s Los Angeles, the series explores the crack cocaine epidemic. In the fifth season, it’s the summer of 1986. Franklin Saint (Idris) and his entire family are rich beyond their wildest dreams, on the verge of having everything they’ve ever wanted — right as the ground begins to fall out from under their feet. The sudden and tragic death of basketball star Len Bias makes the rock cocaine epidemic front-page news, the target of both Democrat and Republican lawmakers. Law enforcement is on a warpath and the militarization of the L.A.P.D. continues as police and politicians decide the only way to deal with this growing scourge is through force — and the creation of the new C.R.A.S.H. (Community Resources Against Street Hoodlums) units. The streets of South Central Los Angeles have never been so dangerous as the Saint family navigates the police, the warring gangs, and the CIA.

The fifth season of Snowfall averaged a 0.24 rating in the 18-49 demographic and 611,000 viewers. Compared to season four, that’s down by 18% in the demo and down by 14% in viewership in the live+same day ratings (including DVR playback through 3:00 AM). While these numbers don’t include further delayed or streaming viewing, they are a very good indicator of how a show is performing, especially when compared to others on the same channel. There can be other economic factors involved in a show’s fate, but typically the higher-rated series are renewed and the lower-rated ones are cancelled. Find out how Snowfall stacks up against other FX TV shows.

Will FX cancel or renew Snowfall for season six? This show has been one of the channel’s highest-rated shows so, as long as there’s more story to be told, I think Snowfall will be renewed. I’ll update this page with breaking developments. Subscribe for free alerts on Snowfall cancellation or renewal news.

4/6/22 update: Snowfall has been renewed for a sixth and final season on FX.

What do you think? Are you glad that the Snowfall TV show has been renewed for a sixth season? Will you be sorry to see this FX show go?