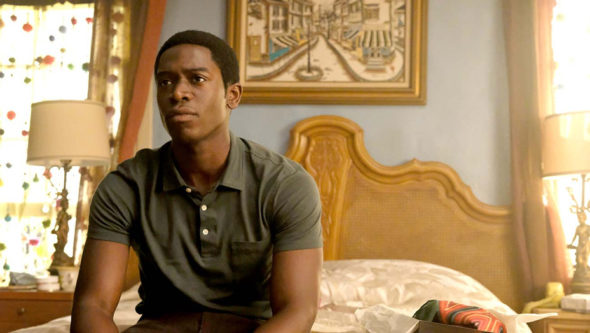 Get ready for more of the 1980s. FX has renewed the Snowfall TV series for a fifth season.

A crime drama series, the Snowfall TV show stars Damson Idris, Carter Hudson, Sergio Peris-Mencheta, Michael Hyatt, Amin Joseph, Angela Lewis, Alon Moni Aboutboul, and Isaiah John. Unfolding in 1980s Los Angeles, the series explores the crack cocaine epidemic. The fourth season begins in 1985. Ronald Reagan has won his re-election campaign and in South Central, the demand for crack cocaine is high. This crew of dealers, led by Franklin Saint (Idris), are benefitting greatly from the rising tide of addiction. However, they are also starting to become aware of the damage the drug is doing to the people and to the place they love.

Airing on Wednesday nights, the fourth season of Snowfall averages a 0.28 rating in the 18-49 demographic and 668,000 viewers. Compared to season three, that’s down by 23% in the demo and down by 24% in viewership. Half of the fourth season’s 10 episodes have aired thus far.

Through the first three episodes of season four, Snowfall is enjoying an incredible +41% increase in Total Viewers, averaging 5.1 million Total Viewers across all platforms. Five episodes remain in the current 10-episode fourth season, which airs Wednesdays at 10pm ET/PT on FX and available for streaming the next day on FX on Hulu. Season four concludes on April 21st. The acclaimed drama series created by the late Academy Award(R) and Emmy(R) nominated director John Singleton, Eric Amadio and Showrunner Dave Andron.

Julian Kimble of The Ringer said Snowfall is “One of the best shows on TV… .For years, Snowfall has been the best show you aren’t watching – now it’s blossoming into something you can’t miss” and Khris ‘Khal’ Davenport of Complex wrote, “One of the most relevant pieces of television to hit the small screen in the last five years… .It’s a series drenched in ’80s pop culture with a dynamic lead and an engrossing story that’s flush with the right music, great costuming, and somehow still being slept-on by those who should know.”

“Snowfall has come into its own as one of the best dramas on TV, its quality and audience growth is a remarkable achievement for a show in its fourth season,” said Schrier. “This series owes its excellence to the amazing team behind Snowfall, its Co-Creator John Singleton and Co-Creator/Showrunner Dave Andron and Executive Producers Walter Mosley, Leonard Chang and Tommy Schlamme. Damson Idris and our entire cast continue to deliver outstanding performances every episode.”

In the fourth season of Snowfall, business is booming. It’s January 1, 1985. Ronald Reagan has won his re-election campaign proclaiming it is “morning again in America,” but in South Central, Los Angeles, it feels more like the sun is getting low. The demand for crack cocaine is high, and while our crew of dealers led by Franklin Saint (Damson Idris) are benefitting greatly from the rising tide of addiction, they are also starting to become aware of the damage the drug is doing to the people and to the place they love. With the entire nation taking note, the LAPD is diverting serious money and resources to the “war on drugs.” Politicians’ phones are ringing. Powerful people are concerned from the hallways of The White House to those of CIA headquarters, where there are whispers that one of their own may be involved in this burgeoning epidemic.

What do you think? Are you a fan of the Snowfall TV series? Are you glad that this FX show has been renewed for a fifth season?

Wow!!!!…l’m so so so incredibly happy that there will be a season five…. thanks to you all that makes this a possible one… thanks

Lived,made money and kept going on! The truth has been told but then America is big Rich lying Machine!

Yeah!!!!! I really thought things were winding up to a series finale–SO happy there will be a season 5!

Snowfall is the BEST EVER

Great news was worried we might lose this show. Not done with season 4 and already looking forward to seadon 5

I hope the end is not the end