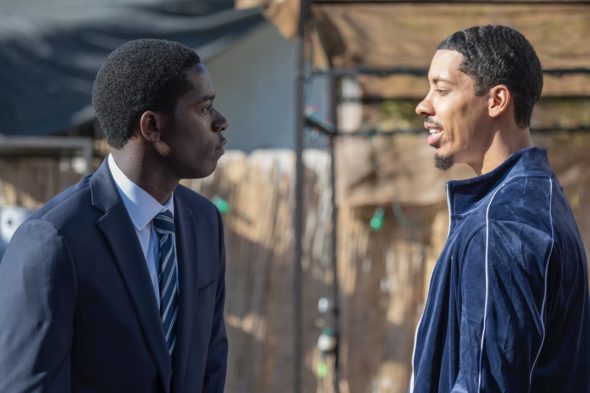 Will Franklin’s crew stick together in the fourth season of the Snowfall TV show on FX? As we all know, the Nielsen ratings typically play a big role in determining whether a TV show like Snowfall is cancelled or renewed for season five. Unfortunately, most of us do not live in Nielsen households. Because many viewers feel frustrated when their viewing habits and opinions aren’t considered, we invite you to rate all of the fourth season episodes of Snowfall here.  *Status Update Below.

An FX crime drama, the Snowfall TV show stars Damson Idris, Carter Hudson, Sergio Peris-Mencheta, Michael Hyatt, Amin Joseph, Angela Lewis, Alon Moni Aboutboul, and Isaiah John. Unfolding in 1980s Los Angeles, the series explores the crack cocaine epidemic. The fourth season begins in 1985. Ronald Reagan has won his re-election campaign and in South Central, the demand for crack cocaine is high. This crew of dealers, led by Franklin Saint (Idris), are benefitting greatly from the rising tide of addiction. However, they are also starting to become aware of the damage the drug is doing to the people and to the place they love.

What do you think? Which season four episodes of the Snowfall TV series do you rate as wonderful, terrible, or somewhere between? Do you think that Snowfall should be cancelled or renewed for a fifth season on FX? Don’t forget to vote, and share your thoughts, below.