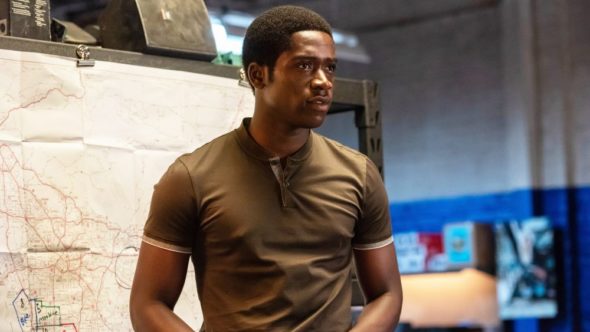 FX has renewed the Snowfall TV show for a fourth season. The announcement was made today at the Television Critics Association summer press tour. Season three is currently airing and season four will launch sometime in 2020.

Snowfall co-creator John Singleton passed away at the age of 51 in April of this year.

The Third Season Continues Wednesday Night with Episode 5, “The Bottoms”

LOS ANGELES, August 6, 2019 – Snowfall has been renewed for a fourth season on FX, it was announced today by Nick Grad and Gina Balian, Presidents, Original Programming, FX Entertainment. The acclaimed drama series created by John Singleton & Eric Amadio and Dave Andron will return to FX in 2020.

“Snowfall has continued its creative leap forward this season with the hard work and contributions of John Singleton and the brilliant performance of Damson Idris,” said Grad. “We are grateful to Dave Andron, Thomas Schlamme, Michael London, Trevor Engelson and Walter Mosley for honoring John’s legacy through their commitment to building on the artistic excellence of Snowfall with a fourth season on FX.”

Snowfall continues tomorrow night, Wednesday, August 7 at 10 p.m. ET/PT on FX with episode 5, “The Bottoms.” Andre lets his guard down as he celebrates LAPD’s victory. Teddy questions Franklin’s ability to control his operation, then suffers a setback of his own. Written by Enzo Mileti & Scott Wilson; Directed by Michael Lehman.

The third season, currently airing, is set in the summer of 1984. Crack cocaine is spreading like wildfire through South Central Los Angeles, continuing its path of destruction and changing the culture forever. Police are waking up to this growing epidemic, and Sergeant Andre Wright (Marcus Henderson) has set his sights on budding Kingpin and next door neighbor Franklin Saint (Damson Idris) and his people. While local law enforcement fights to stem the tide, Teddy McDonald (Carter Hudson) and the CIA are working hard to make sure the flow of cocaine into LA doesn’t stop. To continue funding the war against communism in Central America, Teddy will need to find new routes into the United States using Gustavo “El Oso” Zapata (Sergio Peris-Mencheta) and what’s left of the Villanueva family. As the stakes and losses continue to mount our players truly begin to understand the destructive force they have set in motion and must reexamine their own motivations and the cost of continuing forward from here.

About FX
FX is the flagship general entertainment basic cable channel of FX Networks. Launched in June of 1994, FX is carried in 87 million homes. The diverse schedule features a growing roster of critically-acclaimed and award-winning hit dramas series including Taboo, Legion, Snowfall, Trust, Pose, Mayans M.C. and the upcoming Y; the critically-acclaimed limited series American Horror Story, Fargo, American Crime Story, FEUD, Fosse/Verdon and the upcoming Devs, Shogun, Mrs. America and A Teacher; acclaimed hit comedy series including Atlanta, Baskets, Better Things, What We Do in the Shadows and the upcoming Breeders; the half-hour series Mr Inbetween; the upcoming docuseries The Weekly with The New York Times; and the upcoming special A Christmas Carol. FX is the former home of the critically-acclaimed and award-winning hit drama series The Shield, Nip/Tuck, Rescue Me, Damages, Sons of Anarchy, Justified and The Americans. The network’s library of acquired box-office hit movies is unmatched by any ad-supported television network.

What do you think? Do you like the Snowfall TV show on FX? Will you be watching season four in 2020?