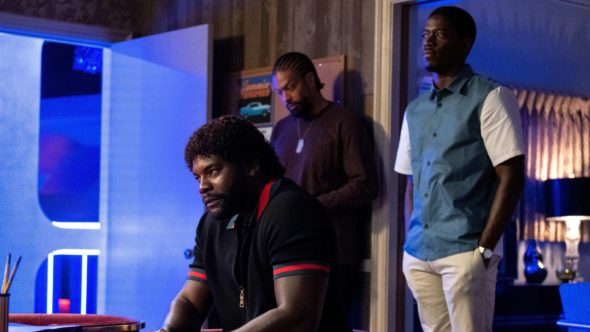 Have Franklin’s troubles just begun? the fifth season of the Snowfall TV show on FX? As we all know, the Nielsen ratings typically play a big role in determining whether a TV show like Snowfall is cancelled or renewed for season six. Unfortunately, most of us do not live in Nielsen households. Because many viewers feel frustrated when their viewing habits and opinions aren’t considered, we invite you to rate all of the fifth season episodes of Snowfall here.  *Status Update Below.

An FX crime drama series, the Snowfall TV show stars Damson Idris, Carter Hudson, Sergio Peris-Mencheta, Michael Hyatt, Amin Joseph, Angela Lewis, Isaiah John, Alon Moni Aboutboul and Devyn Tyler. Unfolding in 1980s Los Angeles, the series explores the crack cocaine epidemic. In the fifth season, it’s the summer of 1986. Franklin Saint (Idris) and his entire family are rich beyond their wildest dreams, on the verge of having everything they’ve ever wanted — right as the ground begins to fall out from under their feet. The sudden and tragic death of basketball star Len Bias makes the rock cocaine epidemic front-page news, the target of both Democrat and Republican lawmakers. Law enforcement is on a warpath and the militarization of the L.A.P.D. continues as police and politicians decide the only way to deal with this growing scourge is through force — and the creation of the new C.R.A.S.H. (Community Resources Against Street Hoodlums) units. The streets of South Central Los Angeles have never been so dangerous as the Saint family navigates the police, the warring gangs, and the CIA.

What do you think? Which season five episodes of the Snowfall TV series do you rate as wonderful, terrible, or somewhere between? Do you think that Snowfall should be cancelled or renewed for a sixth season on FX? Don’t forget to vote, and share your thoughts, below.

*4/6/22 update: Snowfall has been renewed for a sixth and final season on FX.

The whole season is the worst by far. Every season up to 5 is great. Sadly season 5 took a HUUGE dump. It’s so terrible.