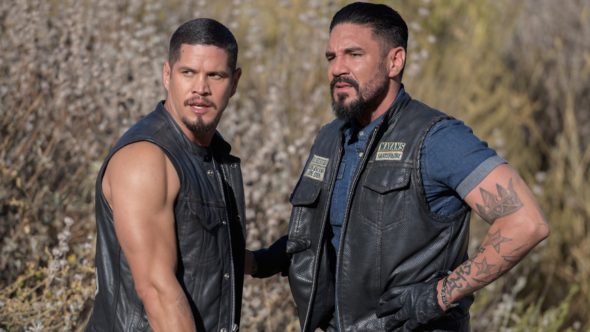 Does the Santo Padre M.C. have a long future? Has the Mayans MC TV show been cancelled or renewed for a fifth season on FX? The television vulture is watching all the latest cancellation and renewal news, so this page is the place to track the status of Mayans MC, season five. Bookmark it, or subscribe for the latest updates. Remember, the television vulture is watching your shows. Are you?

Airing on the FX cable channel, the Mayans MC TV show stars JD Pardo, Clayton Cardenas, Edward James Olmos, Danny Pino, Carla Baratta, Michael Irby, Raoul Max Trujillo, Richard Cabral, Emilio Rivera, Sarah Bolger, Frankie Loyal, Joseph Lucero, and Vincent Vargas. The story follows the life of Ezekiel “EZ” Reyes (Pardo), a member of the Mayans M.C. charter on the California/Mexico border. Once the golden boy with the American Dream in his grasp, EZ, his brother Angel (Cardenas), and the rest of the Santo Padre M.C. face retaliation from other chapters after a failed attempt to align under one King. Meanwhile, EZ and Angel have grown distant from their father Felipe (Olmos) after a heart-wrenching betrayal.

The fourth season of Mayans MC averaged a 0.19 rating in the 18-49 demographic and 607,000 viewers in the live+same day ratings (including DVR playback through 3:00 AM). Compared to season three, that’s down by 24% in the demo and down by 19% in viewership. While these numbers don’t include further delayed or streaming viewing, they are a very good indicator of how a show is performing, especially when compared to others on the same channel. There can be other economic factors involved in a show’s fate, but typically the higher-rated series are renewed and the lower-rated ones are cancelled. Find out how Mayans MC stacks up against other FX TV shows.

Will FX cancel or renew Mayans MC for season five? This show has been one of the channel’s higher-rated scripted shows so I think there’s a very good chance that it will be renewed. I’ll update this page with breaking developments. Subscribe for free alerts on Mayans MC cancellation or renewal news.

What do you think? Are you glad the Mayans MC TV show has been renewed for a fifth season? Are you sorry that season five will be the end?

This show used to be must watch for me, but after EZ murdered his ex girlfriend I’ve pretty much lost my enthusiasm. I also thought the end of season 4 was pretty weak when EZ took over the club.

This show jumped the Sharknado in season 4.

My husband and I enjoy this show greatly. Please keep making new seasons.

I LOVE this show. Please don’t cancel. I’m hoping to see Series 5. I will be so disappointed it it doesn’t get renewed.