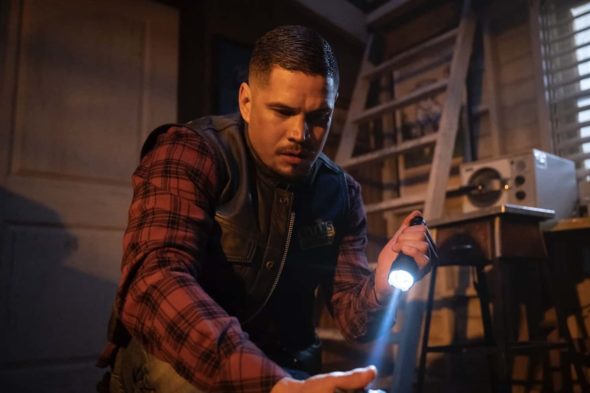 The Santo Padre M.C. will ride again. The Mayans MC TV series has been renewed for a fifth season for 2023 by FX. The fourth season of 10 episodes finished airing in June.

A gritty biker drama, the Mayans MC TV show stars JD Pardo, Clayton Cardenas, Edward James Olmos, Danny Pino, Carla Baratta, Michael Irby, Raoul Max Trujillo, Richard Cabral, Emilio Rivera, Sarah Bolger, Frankie Loyal, Joseph Lucero, and Vincent Vargas. The story follows the life of Ezekiel “EZ” Reyes (Pardo), a member of the Mayans M.C. charter on the California/Mexico border. Once the golden boy with the American Dream in his grasp, EZ, his brother Angel (Cardenas), and the rest of the Santo Padre M.C. face retaliation from other chapters after a failed attempt to align under one King. Meanwhile, EZ and Angel have grown distant from their father Felipe (Olmos) after a heart-wrenching betrayal.

Airing on Tuesday nights, the fourth season of Mayans MC averaged a 0.19 rating in the 18-49 demographic and 607,000 viewers in the live+same day ratings (including DVR playback through 3:00 AM). Compared to season three, that’s down by 24% in the demo and down by 19% in viewership.

LOS ANGELES, July 24, 2022 – FX’s Mayans M.C., the gritty biker drama co-created by Elgin James, will be coming back for a fifth season, it was announced today at San Diego Comic-Con. James shared the news with fans during a panel event for the series. The first four seasons are currently available to stream on Hulu and the fifth season will premiere in 2023. Additionally, 20th Television, a part of Disney Television Studios, has signed James to a new multiyear overall, it was announced by 20th Television President Karey Burke.

“The Mayans have battled for respect, territory and power through four intense seasons that have set the stage for an explosive fifth season that will test their very survival under ‘EZ’s’ newly claimed leadership,” said Nick Grad, President, Original Programming, FX Entertainment. “Elgin James and the creative team, the brilliant cast, crew and our partners at 20th Television have kept fans coming back for more and we are ready to take that ride with them for another season.”

“Elgin is a visionary leader who has managed the nearly impossible task of being in multiple places at one time as director, showrunner and writer on his brilliant Mayans M.C.,” commented Karey Burke, President, 20th Television. “He’s also a passionate champion of emerging voices and young storytellers both in front and behind the camera, which is another reason we love being in business with him. There’s virtually nothing he can’t do and we’re grateful to have him at 20th.”

“20th is my home,” said James. “Dana, Karey and Jane are family who’ve always championed, supported, and challenged me to get the best out of myself. I’m so incredibly grateful to them and to all of the 20th team. I can’t wait to see what we’re able to create together moving forward. And every single member of the Mayans family, from our top of the call sheet to our set PAs and every single person in between have put their blood and sweat into making Mayans something special on the set and on the screen. I’m deeply indebted to John, Eric, Nick and all of FX (particularly Colette Wilson who’s been in the trenches with us from day one) for allowing us to continue to explore and create.”

Mayans M.C. follows the life of Ezekiel “EZ” Reyes (JD Pardo), a member of the Mayans M.C. charter on the Cali/Mexi border. Once the golden boy with the American Dream in his grasp, EZ, his brother Angel (Clayton Cardenas) and the rest of the Santo Padre M.C. face retaliation from other chapters after a failed attempt to align under one King. Meanwhile, EZ and Angel have grown distant from their father Felipe (Edward James Olmos) after a heart wrenching betrayal.

Elgin James was a fixture in Boston’s hardcore punk scene and a member of a multi-ethnic national street gang that targeted neo-Nazi skinheads. After spending a decade and a half in the gang, James left for Los Angeles where he was shepherded by the Sundance Institute Feature Film program and given the tools of filmmaking to learn how to express himself through art instead of violence.

James wrote, directed and scored his debut film, Little Birds, starring Juno Temple and Leslie Mann, which was nominated for the Grand Jury prize at the Sundance Film Festival, and nominated for Best International Feature Film at the Zurich Film Festival. Little Birds was released by Millennium Entertainment and won a National Board of Review award. James was named one of Variety’s “Ten Directors to Watch” and to IonCinema’s list of “The American New Wave 25.”

While in prison, James co-wrote the script Lowriders for Imagine Entertainment and Universal Pictures, released in theaters in 2017.

James co-created the hit FX show, Mayans M.C., of which he currently serves as showrunner and Executive Producer. James, along with Stephen Merchant, is also the co-creator of the Amazon/BBC series, The Outlaws.

About FX
FX, a division of Disney General Entertainment, is a global multiplatform brand that develops, produces, commissions and markets original programming for Hulu and the FX and FXX linear channels in the U.S., and Star+ in Latin America and Disney+ in all other international territories. The FX brand mark appears above the title across its entire slate of originals. Over the past two decades, FX has been responsible for some the most-critically acclaimed and award-winning shows on television. Some of the brand’s current and legacy titles include the dramas American Horror Story, American Crime Story, The Americans, Damages, Fargo, Justified, Nip/Tuck, Pose, Rescue Me, The Shield and Sons of Anarchy; the comedies Archer, Atlanta, Better Things, DAVE, It’s Always Sunny in Philadelphia, Reservation Dogs and What We Do in the Shadows; and a growing slate of docuseries and documentary films.

About 20th Television
One of the Disney Television Studios, 20th Television is a prolific supplier of entertainment programming, including Hulu’s most watched comedy ONLY MURDERS IN THE BUILDING from Dan Fogelman, John Hoffman and Steve Martin, HOW I MET YOUR FATHER from Isaac Aptaker and Elizabeth Berger, and critically acclaimed dramas THE DROPOUT from Liz Meriwether, and DOPESICK from Danny Strong and starring Michael Keaton; ABC’s new comedy hit ABBOTT ELEMENTARY from Quinta Brunson, and THE WONDER YEARS from Saladin Patterson and Lee Daniels; FX’s newest hit THE OLD MAN from Jon Steinberg and starring Jeff Bridges and its blockbuster series AMERICAN HORROR STORY from Ryan Murphy and Brad Falchuk; NBC’s top series THIS IS US from Dan Fogelman; Fox’s No. 1 drama, 9-1-1 and its spinoff 9-1-1: LONE STAR from Ryan Murphy, Brad Falchuk and Tim Minear, in addition to dozens of others. 20th Television shows have amassed a collective 1867 Emmy nominations and 214 Emmy wins, as well as multiple Golden Globes, Humanitas Prizes and Peabody Awards. The studio’s landmark series from its 70 year library include such classics as BATMAN, MODERN FAMILY, M*A*S*H, GLEE, HOW I MET YOUR MOTHER, BONES, EMPIRE, FRESH OFF THE BOAT, 24, BUFFY THE VAMPIRE SLAYER, NEW GIRL and THE X-FILES.

What do you think? Have you kept up with the Mayans MC TV series? Are you glad that it’s been renewed for a fifth season on FX?

Enjoy this show just wish EZ would find out who his other half brother is. It would be explosive. Sorry EZ killed his ex girlfriend that was terrible