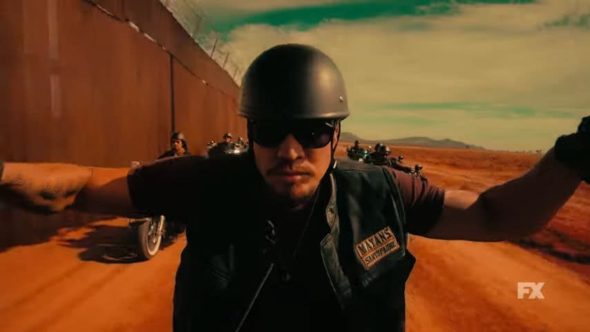 FX and FXX are getting ready to launch new seasons of three series, as well as a Hysterical, an FX documentary about boundary-breaking women in stand-up comedy. The third season of Mayans MC, a sequel of sorts to the channel’s Sons of Anarchy series, will debut on FX on Tuesday, March 16th.

The second season of parenting comedy Breeders will launch on FXX on Monday, March 22nd. And, short-form comedy series Cake will kick off its fourth season on FXX on Thursday, March 11th.

Here’s additional information, as well as a trailer for the return of Mayans MC:

FX Sets Premiere Dates for Next Wave of Programming

The newly announced dates add to FX’s 2021 slate, which begins February 5th with the latest episode of The New York Times Presents, “Framing Britney Spears,” the February 12th premiere of the docuseries Hip Hop Uncovered, and the February 24th premiere of the fourth season of Snowfall. All titles will be available to stream the day after premiere on FX on Hulu.

· Cake serves up season four on March 11 at 10 p.m. ET/PT on FXX with the first two episodes of its nine-episode season.

· Mayans M.C. premieres Tuesday, March 16 at 10 p.m. ET/PT on FX with the first two episodes of its 10-episode third season.

· Breeders returns on Monday, March 22 at 10 p.m. ET/PT on FX with its first two episodes of its 10-episode second season.

Cake is a handcrafted assortment of bite-sized shorts carefully curated and served up as a tasty treat for the mind. Featuring a diverse array of narratives from storytellers both new and established, this half-hour weekly showcase features both live-action and animated comedy programs of varied length that are equal parts thought-provoking, laugh-inducing, artistic, authentic and raw. (Not to mention, totally gif-able!)

Each of this season’s nine episodes will be anchored by Nine Films About Technology from Peter Huang, loosely connected and darkly comedic live-action stories about human relationships in this modern age of smart phones, social media and connectivity.

Both the weekly showcase and individual programs will also stream on FX on Hulu. Cake is produced by FX Productions.

Mayans M.C. follows the life of Ezekiel “EZ” Reyes (JD Pardo), a newly patched member of the Mayans M.C. charter on the Cali/Mexi border. Once the golden boy with the American Dream in his grasp, EZ and his brother Angel (Clayton Cardenas) are closer than ever after uncovering the truth behind their mother’s murder while their father Felipe (Edward James Olmos) struggles to reconcile the choices he and his sons have made.

After U.S. Assistant District Attorney Lincoln Potter (Ray McKinnon) threatens to deport Felipe, EZ and Angel chose to leverage incriminating information to protect him rather than to free rebel leader Adelita (Carla Baratta) from federal custody, leaving her to give birth to Angel’s son while in handcuffs. Meanwhile, Miguel Galindo (Danny Pino) is left reeling over the loss of his mother to apparent suicide, while others quietly suspect foul play. Additionally, the Mayans seek vengeance on their rivals, the Tijuana M.C. Vatos Malditos, after a surprise attack on their club. When the smoke clears, they discover the body of a Sons of Anarchy Motorcycle Club Redwood Original – there will be hell to pay.

Mayans M.C. was co-created by Kurt Sutter and Elgin James. The series is executive produced by James, Michael Dinner and Sutter. The 10-episode third season is produced by 20th Television and FX Productions.

Time has moved on in Season 2 of Breeders, the comedy series starring Martin Freeman and Daisy Haggard that explores the parental paradox that you’d happily die for your children, but quite often also want to kill them.

“Luke” (Alex Eastwood) is now 13 years old and “Ava” (Eve Prenelle) is 10, serving up brand new parenting challenges for “Paul” (Martin Freeman) and “Ally” (Daisy Haggard). Luke’s increasing anxiety and Ava’s growing independence add some new and uncharted complications into the existing chaotic mix of stretched resources, lack of time and the fine art of winging it while looking like you know what you’re doing.

Paul’s parents, “Jackie” (Joanna Bacon) and “Jim” (Alun Armstrong) are older too, as is Ally’s mother “Leah” (Stella Gonet), leading Paul and Ally to find that they now have to parent the generation above them as well as the generation below.

And at the center of all this is Paul and Ally’s relationship. Can they survive the new pressures as they just-about survived the old ones? Or is there a finite number of ropes you can find yourself at the end of?

Hysterical is a new FX documentary feature that gives audiences an honest and hilarious backstage pass into the lives of some of stand-up comedy’s most boundary-breaking women, exploring the hard-fought journey to become the voices of their generation and their gender. Hysterical is an official SXSW Online 2021 Festival selection and a Hot Docs International Documentary Festival selection.

Stand-up comedy had always been a male domain. Only a tiny handful of women have broken out of the brutal world of comedy clubs to become household names. After decades of fighting for a place in the spotlight, things have finally shifted. Hysterical, a feature documentary from director Andrea Nevins (Tiny Shoulders: Rethinking Barbie), journeys backstage and on the road with veteran comedians, rising stars and novices to discover how an intrepid group of boundary-breaking females are changing the game and exploring what it takes to become the voices of their generation and their gender.

ABOUT FX
FX is comprised of the networks FX, FXX and FXM, the video on-demand app FXNOW, and the streaming hub FX on HULU that features exclusive FX series, next day access to current FX and FXX series, and FX Networks’ library of legacy series. FX on Hulu exclusive series include Devs, Mrs. America, A Teacher and the upcoming The Old Man, Y: The Last Man and American Horror Stories. FX, the flagship general entertainment basic cable channel, launched in June of 1994 and is carried in 86 million homes. The diverse schedule features a growing roster of critically-acclaimed and award-winning hit drama series including Pose, Snowfall, Mayans M.C., and Taboo; the critically-acclaimed limited series American Horror Story, Fargo, American Crime Story, FEUD, Black Narcissus and the upcoming Shōgun, Great Expectations and Pistol; acclaimed hit comedy series including Atlanta, Better Things, What We Do in the Shadows and Breeders; the half-hour series Mr Inbetween and the Untitled B.J. Novak Project; a slate of docuseries and documentary features, including The New York Times Presents, The Most Dangerous Animal of All, AKA Jane Roe, A Wilderness of Error, Hip Hop Uncovered and Hysterical; and the FX Original Movie A Christmas Carol. FX is the former home of the critically-acclaimed and award-winning hit drama series The Shield, Nip/Tuck, Rescue Me, Damages, Sons of Anarchy, Justified and The Americans. The network’s library of acquired box-office hit movies is unmatched by any ad-supported television network. FXX, the newest network, launched in September 2013 and is carried in 82 million homes. Geared towards a young adult audience, the schedule features original series, movies, and acquired series. The channel is anchored by the acclaimed hit comedies It’s Always Sunny in Philadelphia, the Emmy(R) Award-winning comedy series Archer, DAVE and Cake, a weekly showcase of short-form comedy programming. FXX is also the cable home to The Simpsons, the longest-running comedy in TV history. FXM was launched in October of 1994 and is now carried in 57 million homes. Its schedule features classic films during the day (FXM Retro), contemporary box office hits and acclaimed, award-winning films, and short-form award-winning original programming in the evening.

What do you think? Are you planning on watching any of these FX and FXX TV shows?

Will definitely be watching season 3 of Mayans MC. Fantastic series, hope it has a very long run.

I will absolutely be watching snowfall as well as mayans mc!