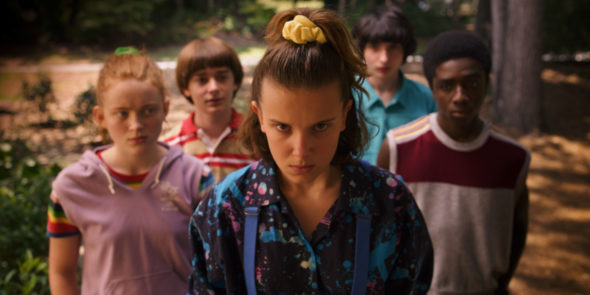 Are the kids all right in Hawkins, Indiana? Has the Stranger Things TV show been cancelled or renewed for a fourth season on Netflix? The television vulture is watching all the latest TV cancellation and renewal news, so this page is the place to track the status of Stranger Things, season four. Bookmark it, or subscribe for the latest updates. Remember, the television vulture is watching your shows. Are you?

Will Netflix cancel or renew Stranger Things for season four? Back in August of 2017, after the series was renewed through season three, the Duffer brothers said it was likely to end with season four. Since this current installment hasn’t been promoted as the “third and final season,” I think it is more likely to return than not. Keep in mind, these days Netflix is quicker to cancel a show than it used to be, but when it renews, that renewal usually comes pretty quickly — within a month or so of the release date. While we wait for word, I’ll keep an eye on the trades and update this page with breaking developments. Subscribe for free updates on any Stranger Things cancellation or renewal news.

9/30/19 update: Netflix has renewed Stranger Things for a fourth season.

What do you think? Are you glad that the Stranger Things TV series has been renewed for a fourth season? How would you feel if Netflix had cancelled this TV show, instead?

I love stranger things it definitely coming back

I could have sworn I already heard Stranger Things 4 was confirmed.. if it doesn’t happen, I will cancel Netflix and then send them hate mail

Yes it has to come back

1000% YES this is a mix of everything that makes a series great
If Netflix dont continue with season 4….then they’ve totally lost the plot…..Enjoy

It should definitely be renewed for season 4, I’m watching season 3 now and I love it!

Yes I binged it the other night. I think there will be at least one more season.