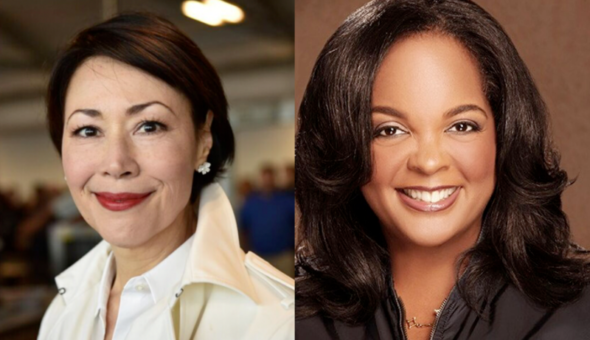 The live medical series “will harness the full power of both television and a multi-platform experience in order to break down medical barriers in service of patients. Additionally, this initiative will foster and empower people across the globe on all screens to become medical detectives.”

Alongside Curry, journalist Kim Bondy (pictured, right) is joining Chasing the Cure as showrunner. The series is set to debut on TBS and TNT on July 25th at 8 p.m. ET/PT.

LOS ANGELES, MARCH 19, 2019 – WarnerMedia Entertainment today announced the premiere date and showrunner for Chasing the Cure (formerly known by its working title M.D. Live) from TNT and Lionsgate Television. This is a groundbreaking enterprise anchored and executive produced by award-winning journalist and humanitarian Ann Curry. It brings together a weekly live two-hour television broadcast with a 24/7 global digital platform in an effort to help patients who are suffering from undiagnosed, misdiagnosed or uncured medical mysteries. This enterprise will harness the full power of both television and a multi-platform experience in order to break down medical barriers in service of patients. Additionally, this initiative will foster and empower people across the globe on all screens to become medical detectives.

Debuting Thursday, July 25, Chasing the Cure will be simulcast on TNT andTBS from 8-10 p.m. ET.

Joining Chasing the Cure as showrunner is Kim Bondy, an award-winning journalist who held top positions at CNN, NBC and Al Jazeera America before becoming Head of Content at Soledad O’Brien’s Starfish Media Group in 2017.

Through a 24/7 digital experience and interactive components including live, second-screen experiences, suggestions, along with highly accredited doctors, will be able to share their experiences, advice and recommendations on what’s happening during the broadcast in real time – all toward helping find cures for people with mysterious conditions.

Additionally, Chasing the Cure will cultivate an online community for everyone to dive deeper into each case, not only empowering every one of us to become medical detectives, but also creating a space for people to provide support to people dealing with undiagnosed conditions. Everyone will have the unique opportunity to submit their own cases via an in-take process to be cared for by an around-the-clock engaged community and considered for the live broadcast.

“How could I not want to be part of this project, given the real chance that it will help people suffer less? This collaboration of physicians, journalists and television creators is not only groundbreaking, it could potentially help encourage new ways for people to access care,” says Ann Curry.

“Leveraging the power of a global digital community to help real people solve their medical mysteries is our mission on Chasing the Cure,” says Michael Bloom, senior vice president of unscripted and live programming for TNT. “With Ann and Kim’s leadership and dedication to powerful, honest storytelling, we plan on delivering significant results to those who are in need of answers or a path to wellness. This is not just a one-dimensional live television experience.”

“The audience will have a chance to proactively make a difference when we launch Chasing the Cure this summer, a project that takes a groundbreaking approach to tackling people’s unsolved medical mysteries,” says Jennifer O’Connell, executive vice president and head of worldwide unscripted television for Lionsgate. “It is one of those rare initiatives that seeks to inspire with a larger humanitarian purpose, and it couldn’t be in the hands of a better network partner or a more brilliant and respected team.”

TNT has ordered ten episodes of the series from Lionsgate Television.

Chasing the Cure is produced by B17 Entertainment and Motiv8 Media in association with Lionsgate Television with Brien Meagher, Rhett Bachner, Kara Kurcz, Brian Lee and Eric Ortner serving as executive producers along with Curry and Bondy.”

What do you think? Are you a fan of medical series? Will you check out Chasing the Cure?

Please renew this show. Im a 38yr old mother and been a nurse 26yrs. Recently found out we have a long list of genetic disorders in my family. My daughter was diagnosed with Acute Intermittent Prophria which is rare. We are desperate for help on how to control this disorder and support. Also I have had health issues my whole life and wondering if some are related to some genetic disorders we are not aware of. I have psoorasis and psoroatic arthritis, MTHFR gene disorder and chronic depression issues.
Heidi G
Clinton Township Michigan

Ann, my 40 year old son has had dizzy spells for the last 10 years. Been to every doctor that we can think of. could your help

Ann I need to be seen I had spiders in my ear now they are in my head and behind my nose my doctor will not even give me a MRI nor will any of the 8 ers give me one I have a huge suit. I’m going to die if you guys dont help me please i have children and I’m scared out of my mind I even have a video of one of then peeking out of my ear one day… please help I think they are spiders I dont know what they are really I have 4… Read more »

My neice has been seriously ill and in pain since she was 12 years old after coming home from a sleepover. How can we get help through this show

I have shortness of breath upon exertion since October 2019 and numbness in all extremities. Many other symptoms with no diagnosis other than a chiari malformation class I and degenerative arthritis in the cervical spine. Both neurologist and neurosurgeon insist my symptoms dont line up with chiari. I had to change my entire lifestyle to limit physical activity. I’m just hoping and praying I would be a candidate for this show if it was still on the air. Thank you for any help or advice you an offer.

I am interested in this because I have a constant spinning feeling around my head ,face and eyes. Have many tests,hospital visits and doctors. How can I get involved to help me find a cure? Thank you in advance, Patricia a Young

Who and how do you contact someone if you’re ‘chasing the cure’ and looking for answers. Unusual presentation with no answers. Degenerative.

My daughter who is 31yrs old had been dealing with illness for over 5 years now. This week she has been in the ER 3 times in so much pain. She has told me that she is to the point of evening done. She just left the ER again 20 min ago. After CT they said nothing wrong with her go home. She hasn’t seemed or had any narcotics until yesterday. She has taken two Norco and they only help her sleep but don’t relieve pain. She doesn’t want pain meds. Just answers!!! Please HELP!!! She had a 12yr old… Read more »

Hello my name is Gloria wallace. I live in fayetteville north carolina…..i have a friend who’s a veteran and he lives in Durham north carolina…..he has something that’s eating up his Red Blood cells and the VA doctors and the drs. At duke university medical center told him he only has 5 months to live, but I’m a strong believer in the Lord but I know that’s not enough so what I need to know is if the drs. From the medical show that Ann Curry hosts. Called the Cure look into his situation and research what could be causing… Read more »

10 yrs ago I worked 3 jobs. Happy buying a house and new car. Living the dream. And then one day I woke up and couldn’t stand without falling down. Went to ER 4 times in one week they kept saying it was in my head. Finally I count take it any longer and went to a physician. I ended up having pots syndrome, it’s were ur blood pressure falls when u stand. They think it might of been caused from chemicals. I was also diagnosed with lupus anti -guaigulant. Thick blood. My problem now, with in a short period… Read more »

Sorry my hands jump around a lot and I hit the wrong button. But as I was saying I lost some of my eyesight. My legs and hands swell terrible. And now I’m allergic to mostly all antibiotics. And yesterday went to try to pull weeds and I swelled up like a balloon. I’m loosing internal things, like gull bladder, my esophagus had nerve damage and couldn’t swallow, so they cut some off and cut my stomach and reattached it to what’s left of the esophagus. I’m on 25 pills a day. And a shot once a month for headaces.… Read more »

I have a son with schizophrenia and it’s been 21 years and I can’t get him help. Please contact me because no one has any answers for me for him. He was diagnosed in 1998 and three community service boards have not helped. They think he just an addict he huffs computer spray to feel better. Help he still has time to be fixed.. his father died and I can’t do it myself… please.. I saw your program and by some miracle through I could get professional help. …Sara