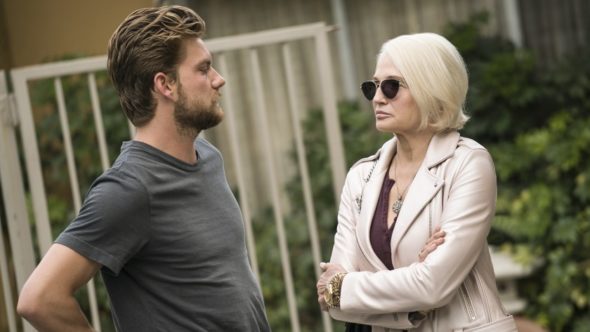 Smurf won’t be blue about this news. TNT has renewed the Animal Kingdom television series for a fifth season. Season four of the drama currently airs on Tuesday nights.

The fourth season of Animal Kingdom is averaging a 0.32 rating in the 18-49 demographic and 1.19 million viewers. Compared to season three, that’s down by 18% and 9%, respectively. Animal Kingdom, is one of two original scripted series currently airing on TNT.

Here’s a press release about the seventh season renewal:

Animal Kingdom Season Four, Airing Tuesdays at 9 p.m. (ET/PT),
Ranks Among the Top 10 Cable Dramas This Year (P18-49, L+7)
July 24, 2019 – TNT, a division of WarnerMedia Entertainment, has renewed its powerhouse drama Animal Kingdom for a fifth season. The popular series continues to grow its fanbase, reaching nearly 18 million viewers this season so far across all platforms, defying industry trends where the typical returning series is down double digits. Season four of Animal Kingdom premiered on par with the season three average and the series is one of this year’s top 10 cable dramas (P18-49, L+7).

Animal Kingdom season four stars Emmy® and Tony® winner Ellen Barkin as the matriarch of the Cody crime family along with Shawn Hatosy, Ben Robson, Jake Weary, Finn Cole and Sohvi Rodriguez. Emily Deschanel also joins the cast this season in a recurring role. This season, Smurf (Barkin) is back on top reminding her boys who’s boss no matter whom she hurts. Trapped with Smurf and becoming increasingly unhinged, Pope (Hatosy) has found new and dangerous ways to deal with his anger. J (Cole) continues to scheme about how to take over the family business, Craig (Robson) plots one of their most difficult heists and Deran (Weary) is worried about his future with Adrian (Spencer Treat Clark). Outsiders move in to threaten the Cody’s fragile peace, including Angela (Deschanel), the former best friend of J’s deceased mother and a recovering junkie, who tries to snake her way back into the family’s good graces. And for the first time audiences meet a young Smurf (Leila George) and the original crew that started it all.

Animal Kingdom is produced by John Wells Productions in association with Warner Horizon Scripted Television. Emmy® winner John Wells and Eliza Clark serve as executive producers on the series. Animal Kingdom was developed for television by Jonathan Lisco and inspired by the award-winning Australian feature film written & directed by David Michôd and produced by Liz Watts, who also serve as executive producers on the series.

About TNT
TNT, a WarnerMedia Entertainment brand, is basic cable’s #1 network in primetime among young adults and is home to some of television’s most popular slate of original series, including The Alienist, Animal Kingdom, Claws, I Am the Night and the upcoming sequel The Alienist: The Angel of Darkness. TNT’s forthcoming, premium unscripted series include Shaq Life and the live, multiplatform event Chasing the Cure. TNT also presents popular shows such as Bones and Castle; primetime specials and sports coverage, including the NBA and NCAA Division I Men’s Basketball Championships and the forthcoming, professional wrestling league All Elite Wrestling (AEW).

What do you think? Do you like the Animal Kingdom TV show? Will you be tuning in for season five?

Why has season 3 of The Mayans MC not aired on FX as scheduled on November 5/2020?

I just watched the 1st 4 seasons on Prime Video. I was hooked, line & sinker. The twist at the end where Smurf leaves almost everything to Pam, whom the boys don’t know. You could tell she hadn’t had them updated since before Julia died. I think Season 5 will show Jay’s intelligence & brazeness will help pull the family back together as a improved Smurf

Will definitely watch Animal Kingdom though I will miss Smurf. Thanks for renewing.

My husband and I will definitely watch Ak.Can’t wait for the 5th season!

I LOVE Animal Kingdom and I’m 67 yrs old! The guys are adorable and I can’t wait to see what they will do next! Smurf was something else!!! J is getting a little scary too.
PLEASE BRING THE SERIES BACK NOW!!!