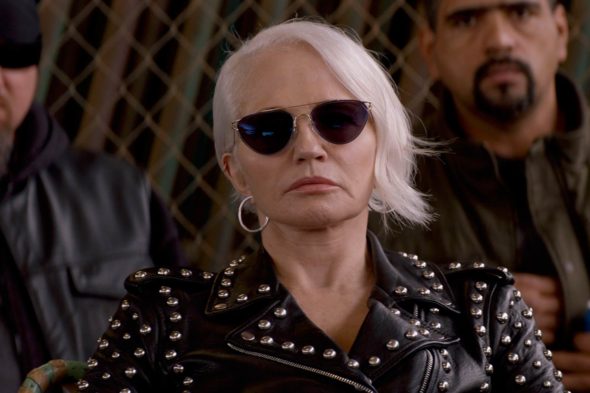 Is Smurf still on top? Has the Animal Kingdom TV show been cancelled or renewed for a fifth season on TNT? The television vulture is watching all the latest cancellation and renewal news, so this page is the place to track the status of Animal Kingdom, season five. Bookmark it, or subscribe for the latest updates. Remember, the television vulture is watching your shows. Are you?

The fourth season of Animal Kingdom averaged a 0.33 rating in the 18-49 demographic and 1.21 million viewers. Compared to season three, that’s down by 15% and 7%, respectively. Learn how Animal Kingdom stacks up against other TNT TV shows.

Will TNT cancel or renew Animal Kingdom for season five? This series remains one of TNT’s top-rated series so I think it will be renewed. Still, I’ll keep an eye on the Nielsens and update this page with breaking developments. Subscribe for free Animal Kingdom cancellation or renewal alerts.

1/15/2021 update: TNT has renewed the Animal Kingdom TV show for a sixth season.

What do you think? Are you glad that the Animal Kingdom TV show has been renewed for a fifth season? How would you feel if TNT had cancelled this TV series, instead?

U must get season 5 on no way u can leave it there,u can do so many other story lines to this programme each one of there lives dont let us down,only thing to look forward to this yr

It’s got to come back on! Been waiting and waiting to see a preview of it!! Best show ever!! Love Smurf and all her son’s! When’s the date??

Never miss a show can’t wait for it to come back on TV. Glade there’s a fifth season.

I never miss an episode of AK. I’ve been in withdrawals waiting for season 5 to come on. Unfortunately without being able to film due to COVID, it is perfect TV Time! Bring back Animal Kingdom asap PLEASE.

ABSOLUTELY, Its got come back! LOVED season 4, really got into the back stories of WHY they are the way they are… Great Cast and Crew

I am absolutely happy that Animal Kingdom has been renewed for a 5 th season. I have never missed an episode & I hope they can stay on for many more years to come. This is my most favorite show to watch. Sincerely Jenny Murray

Got to bring it back great show

Waiting all winter for the next season to begin. And waiting and waiting… when can I expect the season to air on TNT? DO NOT CANCEL THIS SHOW

I love this program keep it don’t cancel.

I’m waiting Patiently for season five, I was very upset That did not come back because of COVID-19 thank God for snow piercer right now but I’m still waiting on Animal Kingdom one of my top five shows I love to watch and what happen to claws too?? Is this tnt thing ??
I just want to see how the boys do without Smurf around.

I mean how really accurate r these ratings! And now people like to watch the trash they call reality tv,which we could do without, keep good tv,less reality!

Couldnt AGREE MORE,WHO CARES ABOUT HOW SOME PPL LIVE AND ACT ETC…..