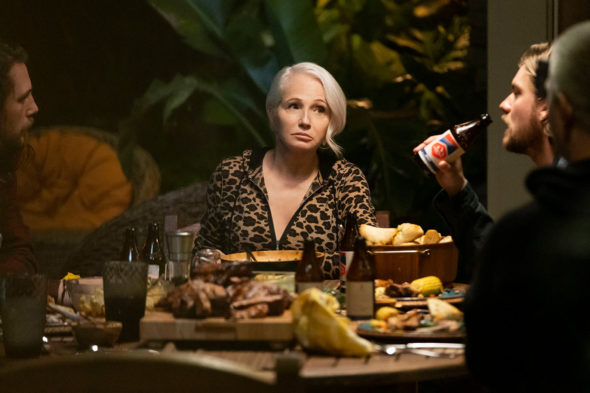 How are things going with Smurf back on top, during the fourth season of the Animal Kingdom TV show on TNT? As we all know, the Nielsen ratings typically play a big role in determining whether a TV show like Animal Kingdom is cancelled or renewed for season five. Unfortunately, most of us do not live in Nielsen households. Because many viewers feel frustration when their viewing habits and opinions aren’t considered, we’d like to offer you the chance to rate all of the Animal Kingdom season four episodes here. *Status update below.

A TNT crime drama, Animal Kingdom stars Ellen Barkin as Smurf, head of the Cody crime family, with Shawn Hatosy, Ben Robson, Jake Weary, Finn Cole, and Sohvi Rodrigues. Emily Deschanel joins on a recurring basis as Angela, a recovering addict and former best friend of J’s (Cole) late mother. Season four kicks off with Smurf showing everyone she is in charge. This season also introduces a new group of criminals, who have a surprising connection to the Codys. Guest stars include Gil Birmingham, Leila George, Grant Harvey, Jon Beavers, Lucca De Oliveira, and Rigo Sanchezsiness. While the desire for control threatens to splinter the Cody men, they will have to unite to fend off emerging external threats.

What do you think? Which season four episodes of the Animal Kingdom TV series do you rate as wonderful, terrible, or somewhere between? Should TNT cancel or renew Animal Kingdom for a fifth season? Don’t forget to vote, and share your thoughts, below.

1/15/2021 update: TNT has renewed the Animal Kingdom TV show for a sixth season.

Amazing show. I hope many more seasons. I was disappointed though about Smurf. She was amazing. Really sorry she is gone.

Please, whatever you do, do not cancel Animal Kingdom.. This is the best show on TV..