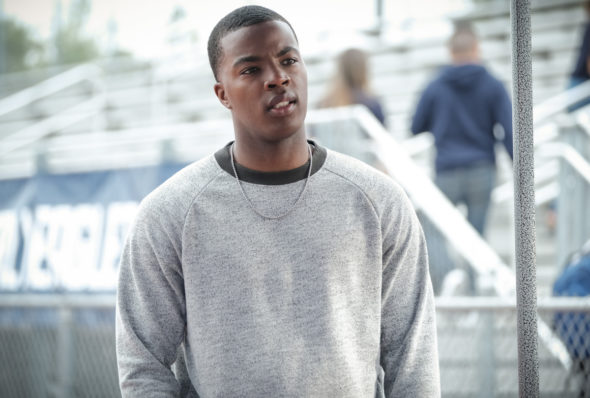 Will Spencer continue to be a football superstar in the second season of the All American TV show on The CW? As we all know, the Nielsen ratings typically play a big role in determining whether a TV show like All American is cancelled or renewed for season three. Unfortunately, most of us do not live in Nielsen households. Because many viewers feel frustration when their viewing habits and opinions aren’t considered, we invite you to rate all of the second season episodes of All American here.

A CW sports drama, the All American TV show stars Daniel Ezra, Taye Diggs, Karimah Westbrook, Chad L. Coleman, Bre-Z, Greta Onieogou, Samantha Logan, Michael Evans Behling, Cody Christian, Monet Mazur, and Jalyn Hall. Inspired by the life of NFL player Spencer Paysinger, the story centers on Spencer James (Ezra), a rising high school football player and an A student at Compton’s South Crenshaw High. When Beverly High football coach Billy Baker (Diggs) recruits Spencer to join his team, the young man must learn how to live in two worlds at once, maintain his grades, and still leave it all on the field. In season two, Spencer is now a football State Champion who must decide whether he should stay in Beverly Hills or move back to South LA to reunite with his family and play for his father.

What do you think? Which season two episodes of the All American TV series do you rate as wonderful, terrible, or somewhere between? Do you think that All American on The CW should be cancelled or renewed for a third season? Don’t forget to vote, and share your thoughts, below.

I love All American, so glad it’s still showing.

I just watched season one and two in 3 days on Netflix I hope there is a season three, excellent show.

I LOVE ALL THE SEASONS N ALL THE EPISODES 1&2…I’m 51 ,MY DVR Always SET RECORD EVERY MONDAY CUSE I DON’T WANNA MISS NOTHING…I HOPE CW KEEP THIS SHOW…ALL AMERICAN IS THE BEST N I LOVE SPORTS…Hey CW KEEP ALL AMERICAN COMING WIT SEASON 3 N SO ON… I’LL B WATCHING..#1 FAN… SPEEDY RECOVERY SPENCER!!!

This is truly an excellent show, we love it and we’ve watched it from the beginning, please keep going with season 3, 4, 5, 6 etc.

All American is the best show ever make a season3

This is a great show, I’ve watched S1 twice and enjoyed S2 just as much. I really hope to see an S3 in the future soon, possibly more!

I started watching All American on Netflix last year, I loved it so much and google to see if they had renewed it for 2019 and they did. I have watched every episode this year and I hope it stays on! Im 61 years old. I love Spencer James!! Great actor!

I love this show it should be renewed for season 3,4, and 5 best show ever

I cannot just watch one episode. It just draws uou in until you keep watching more and more. Love this show

I love all american and i hope they keep this show around for at least 5 or 6 seasons. Every time i find a afican american show i like they always seem to cancell it.. Black shows matters

I have watched every episode of all american and I love the show. If it was anyway for you to see how many times I have and still watch this movie someone whould probably think I get a check. I watch it every day and night. It’s the best show I’ve seen in a long time. This show is the best show on TV. I love, love, love Spenser and I want to see his next move. I know he will play football again, because he plays in the NFL. I need the show to continual.