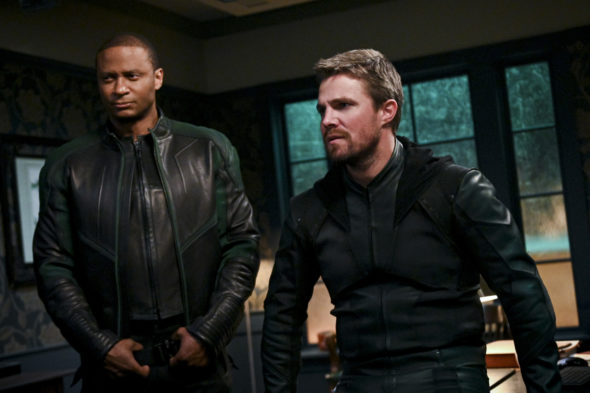 Will Oliver survive the eighth and final season of the Arrow TV show on The CW? As we all know, the Nielsen ratings typically play a big role in determining whether a TV show like Arrow is cancelled or renewed for season nine (in this case, the show’s ending). Unfortunately, most of us do not live in Nielsen households. Because many viewers feel frustration when their viewing habits and opinions aren’t considered, we invite you to rate all of the eighth season episodes of Arrow here.

An action-adventure series on The CW, the Arrow TV show stars Stephen Amell, David Ramsey, Katie Cassidy, Rick Gonzalez, Juliana Harkavy, Katherine McNamara, Ben Lewis, Joseph David-Jones, and Charlie Barnett. Others appearing in the final season include Willa Holland, Colton Haynes, Colin Donnell, Josh Segarra, John Barrowman, Susanna Thompson, LaMonica Garrett, Rila Fukushima, Byron Mann, Lexa Doig, and Audrey Marie Anderson. The series begins with billionaire playboy Oliver Queen (Amell) being shipwrecked and presumed dead for five years. He returns home to Star City, bent on righting the wrongs of his family and fighting injustice as the Green Arrow. In season eight, following the arrival of a godlike being called The Monitor (LaMonica Garett), Oliver leaves his home, his family, and his team behind to take on his most challenging battle yet with the entire multiverse at stake.

What do you think? Which season eight episodes of the Arrow TV series do you rate as wonderful, terrible, or somewhere between? Do you think that Arrow on The CW should be ending or renewed for a ninth season? Don’t forget to vote, and share your thoughts, below.

This show should be cancelled . Totally lost interest .

Renew!! The current cast is doing an epic job. The writers continue to inspire and thrill. This show is my top watch pick along with Legends of Tomorrow. Best, hands down , of all the DC shows.

I love the Arrow show with the original cast. I have watched every single show. My kids call me the “biggest Arrow Fan” I wish the show would continue. I hate that it is ending.

I love the Arrow series. However, I am not too thrilled with the new generation cast of Arrow on these episodes. They should have their own series.

This show is tired, they have had a few good years but now time to say goodbye.