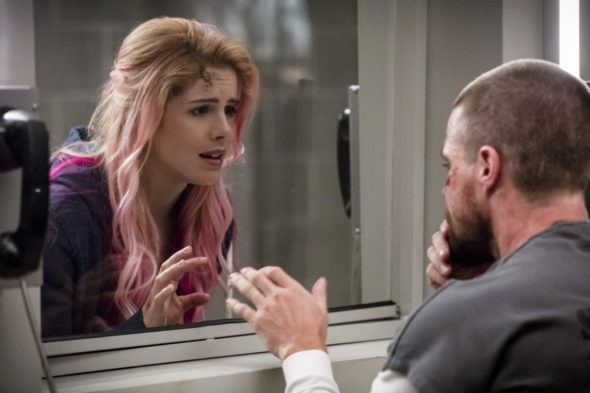 It the Green Arrow still hitting the target during the seventh season of the Arrow TV show on The CW? As we all know, the Nielsen ratings typically play a big role in determining whether a TV show like Arrow is cancelled or renewed for season eight. Unfortunately, most of us do not live in Nielsen households. Because many viewers feel frustration when their viewing habits and opinions aren’t considered, we’d like to offer you the chance to rate all the Arrow season seven episodes. **Status update below.

What do you think? Which season seven episodes of the Arrow TV series do you rate as wonderful, terrible, or somewhere between? Should The CW cancel or renew Arrow for an eighth season? Don’t forget to vote, and share your thoughts, below.

If the writers would compare the original shows with today, the old shows had flavor. This is not to say there is not any today. But why are heroes being increased, and why expose them to all and have them without the mask? Arrow I feel should be with the original heroes. do w/o profanity. Just my opinion

I loved all the seans off arrow

Episode s07e11 aired on on 1/28/2019 the female escapee states, ” I love it when a plan comes together.” Hey script writers that was the phrase George Peppard used on the A-Team

Arrow needs a season 8 they had twist of the new Green Arrow in this season so they need so more of old Arrow working with the cops .

Arrow it amazing series it needs Batwomen in the season 8 crossover so they can have more of them in Gotham.

I still feel the characters, Rene, and Diaz take away from the original cast…Other than that I am still hooked

Absolutely. The writers ruined it snd tired of all the parallel time travel crap

It seems the characters Rene and Diaz take some of interest from Arrow. At the beginning this was was dynamite. It still is, just the characters seem take something away…It is still a 9 one notch down from 10

Arrow is by far the most thrilling action packed show on TV. I love it!