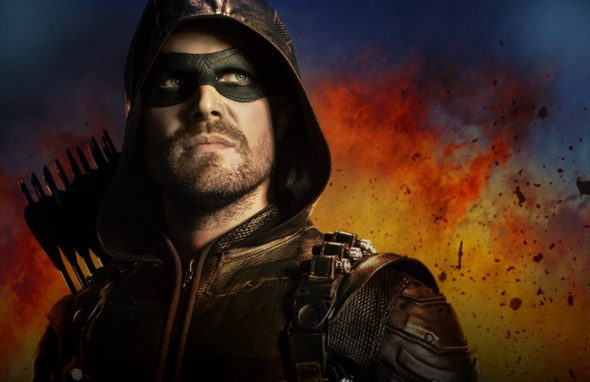 Will Arrow have a satisfying conclusion? Has the Arrow TV show been cancelled? Renewed for a ninth season on The CW? The television vulture is watching all the latest cancellation and renewal news, so this page is the place to track the status of Arrow, season nine. Bookmark it, or subscribe for the latest updates. Remember, the television vulture is watching your shows. Are you?

Airing on The CW television network, the Arrow TV show stars Stephen Amell, David Ramsey, Katie Cassidy, Rick Gonzalez, Juliana Harkavy, Katherine McNamara, Ben Lewis, Joseph David-Jones, and Charlie Barnett. Others appearing in the final season include Willa Holland, Colton Haynes, Colin Donnell, Josh Segarra, John Barrowman, Susanna Thompson, LaMonica Garrett, Rila Fukushima, Byron Mann, Lexa Doig, and Audrey Marie Anderson. The series begins with billionaire playboy Oliver Queen (Amell) being shipwrecked and presumed dead for five years. He returns home to Star City, bent on righting the wrongs of his family and fighting injustice as the Green Arrow. In season eight, following the arrival of a godlike being called The Monitor (LaMonica Garett), Oliver leaves his home, his family, and his team behind to take on his most challenging battle yet with the entire multiverse at stake.

The eighth season of Arrow averages a 0.30 rating in the 18-49 demographic and 838,000 viewers. Compared to season seven, that’s down by 13% and 23%, respectively. Find out how Arrow stacks up against other The CW TV shows.

We already know that there won’t be a ninth season of this CW series. However, it’s still worthwhile to track the ratings as they may help ensure that a spin-off series comes to fruition or, that Amell might reprise his character someday. I’ll update this page with breaking developments. Subscribe for free alerts on Arrow cancellation or renewal news.

What do you think? Are you sorry that the Arrow TV show won’t be renewed for a ninth season? Is this the right time to end the show?

Definitely Arrow should have had ninth season, really miss this show!

Plzz make Arrow sesson 09 he is not dead man

There should definitely be a 9th season with Stephen Amell!! Please!! Bring this back!!

there needs to be a 9th season pleaseee!!!!!! ive waited sooooo longgggg for this please man