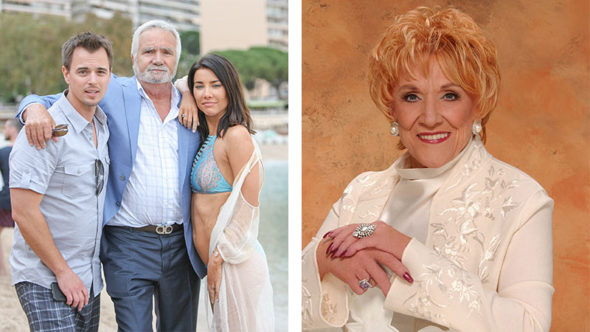 Young and the Restless and Bold and the Beautiful are both running out of episodes to air this week, and CBS now has a plan for what to do going forward. It is not known when the soaps will be able to go back into production. Starting next Monday, the CBS soaps will have theme weeks.

CBS revealed the plan for the future of both soaps in a press release. Check that out below.

“Travel back in time as CBS’s top-rated daytime dramas, The Young and the Restless and The Bold and the Beautiful, throw it back with memorable themed weeks beginning Monday, April 27 on CBS and CBS All Access.

The Young and the Restless, now in its 47th season (and 31st straight as the most-watched daytime drama), will feature episodes focused on beloved and iconic Genoa City matriarch Katherine Chancellor (played memorably by the late Jeanne Cooper).

The Bold and the Beautiful, which recently celebrated 33 years on the Network, will amp up the fantasy with “Escape to Monte Carlo,” Monday-Friday at 1:30 ET/12:30 PM PT.

As part of the themed week, two documentary-style, making of episodes filmed on location in Monaco will air Monday, April 27 and Tuesday, April 28. These two “Becoming Bold and Beautiful” episodes have never been seen before on CBS, and feature rare, behind-the-scenes footage of cast and crew (including executive producer Bradley Bell) as they shot throughout the enchanting mountainside country.

Also, as an early kickoff to the theme week, on Friday, April 24, B&B will air the Monte Carlo-themed episode in which Forrester Creations and Spectra Fashions face off for a fashion showdown benefitting charity.

“It’s incredibly fun to offer fans an opportunity to look back at such memorable moments from Y&R and B&B,” said Amy Reisenbach, Executive Vice President, Current Programs, CBS Entertainment. “Both of these shows have extraordinary legacies, and these specially curated episodes are only a small portion of what we hope to be able to present in the coming weeks.”

The stars of Y&R and B&B will provide bonus content with fresh commentary at the beginning and end of many episodes. Additional theme weeks of both series will be announced in the near future.”

What do you think? Will you watch these themed reruns until the soaps return?

They need to resume asap as the repeats are beyond boring and the daytime audience will be gone very soon.

I hate the reruns… won’t go back to those sorts !

I would rather the shows were in sequence, some I haven’t seen, but skipping around isn’t fun to watch.

No I love the happenings recent I want to c them as soon as they can!

No…its too warm outside to watch a repeat of folks passed, gone, release or have gotten older now.

I certainly will watch, love to see some of the older shows. I probably missed some all those years ago.

As a faithful viewer of Y & R since the series first began in the 70’s, I’m absolutely thrilled to have the opportunity to watch these wonderful episodes from past years!!! Thank you!!!

If they are showing old shows, then please go back to the very beginning! I have been one of the first fan of this soap in 1973, I was home having children. It kept me sane!!! Lol

You had better believe I’ll be watching Y&R, although I wish they would go back into the 80s. I started watching with my mom and grandma when I was very young. I am very excited about the Katherine the Great episodes. While I still watch and I still love Y&R (Anthony Morina and Josh Griffith are doing a wonderful job very reminiscent of the old days), Jeanne Cooper’s absence is deeply felt. Thankfully we still have Jill (Jess Walton). More meddling Jill!

Yes, I would watch them! I’ve been watching y&r and b&b for the past 6 or 7 years. I luv watching them both!! It would like one person suggested, be neat to see from the very beginning how each soap developed over time. And see how or where each character came from!

Yes. I would love to see these episodes. They were great back then and will be great to rewatch again. It’s been such a long time ago, it will seem like their new. Love “The Young and Restless “, “The Bold and Beautiful “. Be safe and this too shell pass. Praying for us all.

I think they should start at the very FIRST episode of each soap opera & go in sequence until they resume filming. I’ve been watching Y&R since grade school & would LOVE to see it from episode 1!!!

I think I have every episode of the Young and Restless. More than once have I sat and watched it all day long and into the night time. Great to have this to watch. It would be nice if they would start at the first episode and pick the high lights of it and go into the next one. Would take a little time but would be well worth it.

Yes I look forward to watching old episodes although I can’t wait for new episodes to return. My 2 favorite shows for many many years!