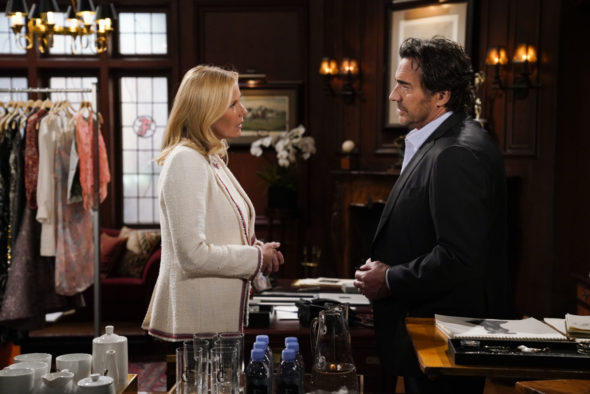 CBS renewed The Bold and the Beautiful for the 2019-20 season in April 2019. At one point, this venerable soap received multi-season renewals but now, it seems like CBS is taking things one year at a time. Is that a bad sign? Will this soap be cancelled or renewed for season 34 for 2020-21? Stay tuned. *Status update below.

Note: The ratings for the week of January 27th aren’t included because there were major preemptions due to the impeachment trial.

Note: CBS ran out of original episodes with week 31 so we won’t resume tracking the ratings until they can broadcast new episodes again.

Please renew Bold and Beautiful!
We love it, re ord it n can’t wait over the weekend to see the next show. Been watching it for many years. Not much else except GH which we also watch.
Sure hope you dont cancell it, Pleeeeeze.

Please renew bold and the beautiful. I like looking at the soap opera. Do not cancel. It.
F

PLEASE RENEW B & B
We in Australia didnt know it was in trouble. Due to bushfires, floods we’ve been recording it to watch later. Plus millions have told me how they have yet to receive INSURANCE from bushfires to buy TVs/ any device to WATCH BB
BB is the ONE constant in our lives.. PLEASE RENEW ♡♡♡♡

Please renew B&B; I have watched it since the beginning and would miss it if it was canceled! Thank you!

The Bold and the Beautiful is one of the best daytime series on all stations. PLEASE DON’T TAKE IT OFF. Renew it please. My family and friends are all fans. The story line is great.

The 18 minute story time is the worst frustration since I experienced the 45 minute hour with my therapist in the 80’s.
Bold and Beautiful you need an HOUR!!

I HATE THE COMMERCIALS!! Really? 15 to 18 minutes of the story is so BAD. I’M REALLY ready to give up on this tease game. BB

Why do Bold and Beautiful stay on one episode so long? Tired of the Thomas drama. Why does Hope have to be the dumb one all the time? Expose Thomas and Move on. Put Liam an Hope back together and let Stephanie move on with someone else. Making me not want to look at it anymore.

I love watching B&B but don’t like the favortism of the soap just focusing on only two characters brook and hope,,they are not the show,,so i stopped watching..there are better more interesting character..i stopped watching when hope was brought back on and busted up the most popular couple on B&B and that is Steffy & Liam..and then it was all about hope and brook..moved away from FORRESTER CREATION fashion show and fashion wars..get rid of both brook and hope and the show would be good again..you would still have two other logans on,,donna and Katie..then you got rid of Stephanie… Read more »

h Hi I would like to see the bold and beautiful to contiane,because I think it is the best soaps that I have seen I have seen others before but they weren´t so good .I live in sweden and they showed other soaps from america.Like General hospital,Days of our lives and so on.