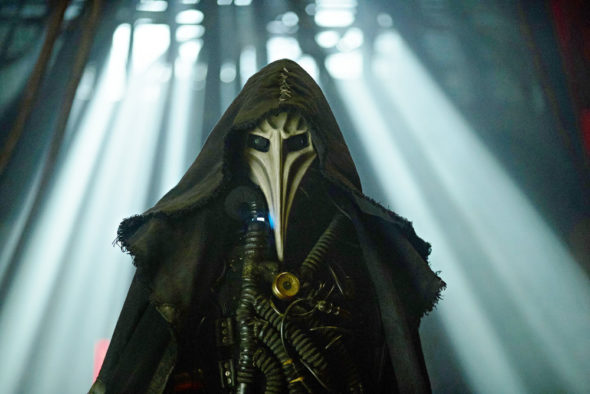 Has the Witness been stopped? Is the 12 Monkeys TV show cancelled or renewed for a fifth season on Syfy? The television vulture is watching all the latest cancellation and renewal news, so this page is the place to track the status of 12 Monkeys, season five. Bookmark it, or subscribe for the latest updates. Remember, the television vulture is watching your shows. Are you?

A Syfy mystery, 12 Monkeys stars Aaron Stanford, Amanda Schull, Todd Stashwick, Emily Hampshire, and Barbara Sukowa. The sci-fi drama series follows the journey of James Cole (Stanford), a man from 2043, who is sent back in time to stop the evil Army of the 12 Monkeys from destroying the world. In season four, James and Cassandra travel further back in time than they have. Syfy says, “According to legend, their only hope lies with a weapon capable of stopping the Witness for good. But they’ll soon discover that in order to win the final battle and save time itself, they will have to make the ultimate sacrifice.”

Since the show is ending with this fourth season, there is no need to wonder whether Syfy will cancel or renew 12 Monkeys for season five. I’ll still keep an eye on the Nielsens, because it helps with predictions for other Syfy TV series. I’ll watch the trades and press releases too, and pass along any word about potential spin-offs or revivals. Subscribe for free 12 Monkeys news alerts.

What do you think? Is the 12 Monkeys TV show ending at the right time? If it were up to you, would Syfy cancel or renew this TV series for season five?