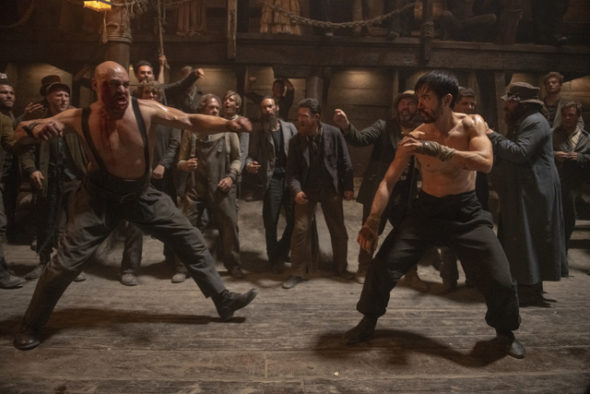 Can this show find a way to survive without Cinemax? Has the Warrior TV show been cancelled or renewed for a third season? The television vulture is watching all the latest cancellation and renewal news, so this page is the place to track the status of Warrior, season three. Bookmark it, or subscribe for the latest updates. Remember, the television vulture is watching your shows. Are you?

Airing on the Cinemax cable channel, Warrior stars Andrew Koji, Kieran Bew, Celine Buckens, Olivia Cheng, Dianne Doan, Dean Jagger, Langley Kirkwood, Hoon Lee, Christian McKay, Dustin Nguyen, Joe Taslim, Chen Tang, Jason Tobin, Miranda Raison, Joanna Vanderham, Tom Weston-Jones, and Perry Yung. The series follows Chinese immigrant Ah Sahm (Koji), who arrives in San Francisco in 1878, during the Tong Wars, to look for his sister, Mai Ling (Doan). As a gifted fighter, it’s not long before one of the most powerful organized crime families (known as a tong) in Chinatown recruits Ah Sahm to be its hatchet man. Season two follows rival Chinatown tongs, the Hop Wei and the Long Zii, as they fight for dominance amidst the growing anti-Chinese racism that threatens to destroy them all. After barely surviving last season’s disastrous showdown, Ah Sahm is back with the Hop Wei and determined to wreak vengeance on Long Zii’s new leader. The series is based on the writings of martial arts legend Bruce Lee.

The second season of Warrior averaged a 0.01 rating in the 18-49 demographic and 70,000 viewers. Compared to season one, that’s down by 63% in the demo and down by 47% in viewership. Find out how Warrior stacks up against other Cinemax TV shows.

Will Cinemax cancel or renew Warrior for season three? In early 2020, it was announced that Cinemax is getting out of the original series business so, unless another outlet picks this series up, it looks like season two is the end. I’ll update this page with breaking developments. Subscribe for free alerts on Warrior cancellation or renewal news.

4/14/21 update: Warrior has been renewed for a third season by HBO Max.

What do you think? Are you glad that the Warrior TV show has been renewed for a third season on HBO Max? How would you feel if this show were cancelled instead?

Amazing series cannot wait for the next season!

I really hope Warrior gets renewed for a season 3!!! I would feel horrible for all of the fans of this incredible show if it just ended after only 2 seasons without being wrapped up. There is so much more of the story to be told. I would absolutely watch it on any platform. I feel that with the current climate of hate crimes against Asians, this history is even more important now than ever.

I adore this show! In fact, it’s made me appreciate Chinese history so much more. What is with Cinemax and cancelling great shows like ‘The Knick’ after 2 seasons?

This show is AWESOME !!!! It is being renewed thank God!!! Now question is what network is going to grab this awesome series ????

Hi there! I am wondering where you heard that this show is being renewed? I was searching for information on this, and couldn’t find any…thank you

Hey, I’m 84 years old and love this series. I like the story line, the action, the history. It is a great show with great interest and action.
Please renew!!

I love this series. I really, really, really hope it’s picked up. I binged watched it. No sleep. Dog tired at work…but, it was soooo worth it. Amazing! Amazing!

Besides having very well-choreographed fighting scenes, the plot has multiple characterizations that feel real, their own stories to tell. I’ve felt sympathetic with most of the roles, an indication that the writing is taking care to avoid stereotypes and each character is filled out in their own shades of grey. The protagonist ( Ah Sahm) is also an evolving role, one that I look forward to seeing how he develops. The scenes in Chinatown are also well built up, so there is a cinematic quality like a film noir, giving a classic feel to it all. I certainly would look… Read more »

The best series out there. I would travel to the moon to watch Season 3. Cinemax no longer exists in this house…fools !