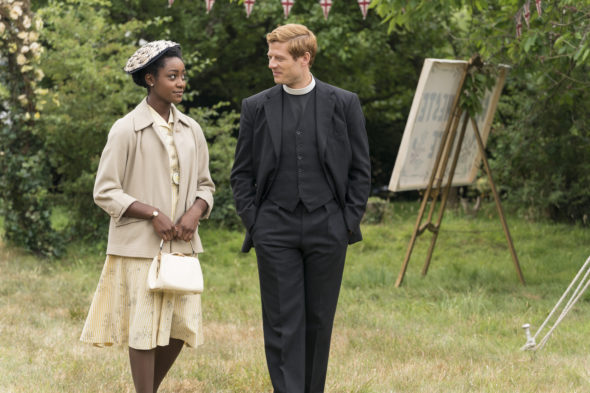 Are Sidney and Geordie still on the case? Has the Grantchester TV show been cancelled or renewed for a fifth season on PBS? The television vulture is watching all the latest cancellation and renewal news, so this page is the place to track the status of Grantchester, season five. Bookmark it, or subscribe for the latest updates. Remember, the television vulture is watching your shows. Are you?

Because it’s supported by “Viewers like you,” rather than ads, we don’t have ratings when predicting whether PBS will cancel or renew Grantchester for season five. Fortunately for viewers like you, this time around, it was renewed through its fifth season, ahead of the US season four premiere on PBS. There’s no word that this will be a final season, but this show originates on UK’s ITV, and British programs often don’t run as long as American ones, so I’ll keep my eyes peeled for any news. Subscribe for free Grantchester cancellation or renewal alerts.

What do you think? Do you hope the Grantchester TV show will be renewed past its upcoming fifth season? How would you feel if PBS cancelled this TV series, instead?