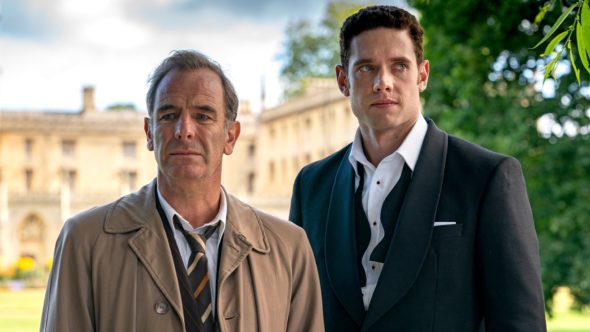 Grantchester isn’t going away anytime soon. Deadline reports the PBS and ITV TV show has been renewed for a sixth season.

Set in the 1950s, the crime drama follows the unlikely pairing of a detective (Robson Green) and a vicar (Tom Brittney) as they solve crimes in the small English village of Grantchester. The cast also includes Tessa Peake-Jones, Al Weaver, Kacey Ainsworth, and Felix Scott.

On Instagram, Grantchester stars Robson Green and Tom Brittney announced the TV show will return to PBS and ITV for a sixth season. The show’s season five finale debuts on PBS this Sunday, July 19th, at 9 p.m. ET/PT.

What do you think? Do you watch Grantchester? Are you glad it’s coming back?

Robson Green is a bit of a British treasure and it’s a shame that he has never really been given the chance to shine on the USA airwaves.

And if you like Grantchester, then you must check out another wonderful show, Inspector Morse, with John Thaw and Kevin Whately.

We’ve watched them all. Generally beautiful English countryside with its country church and, mostly benign inhabitants offset by the harsh realities of the criminal element. I’m unhappy the finale is here already, it just started!

Absolutely, I watch Grantchester and love it. So happy it’s coming back!

I’m glad to see that this program has been renewed. How about more than 6 episodes a season.

I gave up on this show this season, should have ended it with the old priest.

I agree, the new guy just doesn’t have it. I stopped watching g.

Been waiting a long time for closure…Can’t wait for more!

Great news! I only wish they did more than 6 episodes in a season. I’d love to see more.

Yes I am thrilled it is coming back for Season Six.