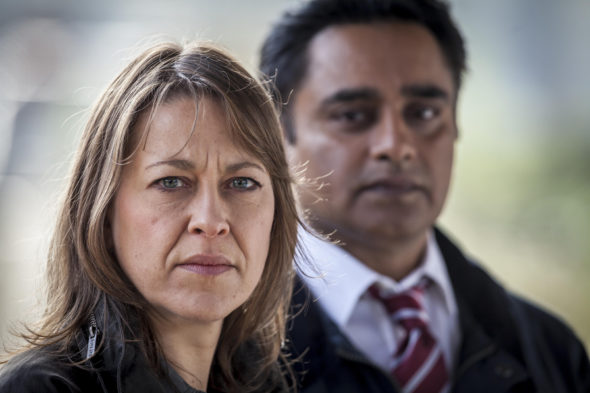 In season one, after the bones of a young man are found at the site of a demolished house, Stuart and Khan have a 39 year-old murder to crack. Their investigation will shake up the lives of four people who have been waiting for this moment for nearly four decades.

The police train much of their focus on Arlingham House. This red-bricked Victorian has served as a private home, rented flats, a hostel for homeless young men, a British Rail records office, and a DHSS office.

Stuart and Khan need to determine who murdered this boy, and what events in 1976 led up to his death. As they delve more deeply into the case, the secrets they uncover will make a lasting change to the lives of several families.

Unforgotten explores complex issues about modern life. How well does anyone really ever know anyone else? It ultimately asks if justice is ever “too cold to serve.”

What do you think? Do you like the Unforgotten TV series? Should this PBS TV show be cancelled or renewed for another season?

My husband and I love this show and are waiting for the next season to come out. It is a contrast look on the other side of how murder affects all participants and beyond. The cast is fantastic and we truly hope you are able to keep this show going.

Great show!! When is episode 4 going to start??

I love this program Unforgotten. It’s very captivating. One of my favorites.

I love this show – the plots, acting, and spell binding interest in all of the stories. PLEASE do NOT cancel this series

Great, great show (I follow everything Nicola Walker appears in) . . . Unforgotten is a gritty crime show wrapped around such interesting characters/plots. Love PBS for putting out some of the best adult enteretainment out there. ~ CC King-CO

Please do not cancel this show. It really holds my interest. Is the lead detective retiring?

In my view, this is a wonderful series. I’ve watched all 3 seasons, and am delighted to read the show has been renewed for a 4th season. The acting in this particular season has been truly great — Nicola Walker, whom I’ve seen in other productions, is superb, and the cast always seemed to give such strong, yet nuanced, performances. The series rises to the challenges of the mystery/detective genre, and is able to fulfill the goal of all good literature and drama — to honestly illuminate the human condition. Bravo !

One of the best mystery shows on tv.i am 70 been watching pbs since its inception. The forsyles. Shows and characters wonderful. One in four guilty but all four have secrets and it seems could be the pretrador. Do not guess until end. I often now the answer. The two detectives hold my interest and just enough of their personal life to make it interesting