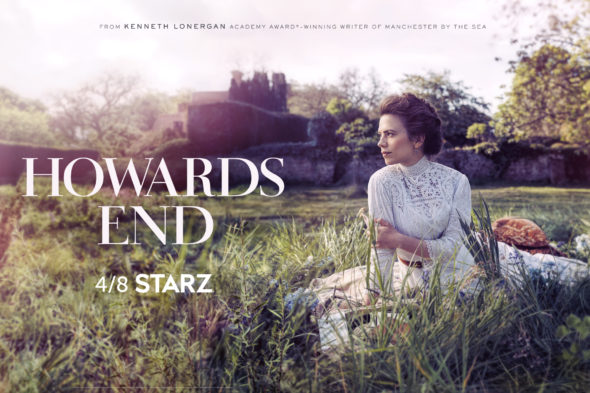 Starz carries a small but varied slate of original, scripted TV series. From contemporary crime dramas like Power, to time traveling sagas such as Outlander and the glorified gore that is Ash Vs Evil Dead, there seems to be something for everything. Enter the new Howards End, a TV show adaptation of EM Forster’s classic novel. Even if this latest take on a turn-of-the-20th-Century masterpiece proves competitive in the Nielsen ratings game, will it matter, or is this “limited” series but a mini-series, regardless? Will Howards End be cancelled or renewed for season two? Stay tuned.

What do you think? Do you like the Howards End TV show? Should this Starz TV series be cancelled or renewed for a second season?

4/29/18 update: The season finale was also the series finale so this show won’t be back.

Great show! Will have to read the book since it ended in a rather abrupt way. Ironic that what was given came back full circle. Love this period piece; beautifully done in class and taste.

E.M. Forster’s novel is a sweeping indictment of the class system of the 20th century. It is a novel of exquisite depth and beauty and it ends as the series presents it. Anyone looking forward to a season 2 should really pick up the book and read the author’s words.

Pleaseeeeeee renew… I love the show.