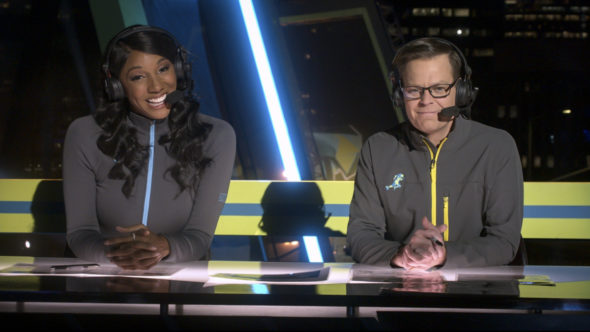 Do we have a winner? Is the Million Dollar Mile TV show cancelled or renewed for a second season on CBS? The television vulture is watching all the latest TV cancellation and renewal news, so this page is the place to track the status of Million Dollar Mile, season two. Bookmark it, or subscribe for the latest updates. Remember, the television vulture is watching your shows. Are you?

A CBS high-stakes obstacle course reality series, Million Dollar Mile is hosted by NFL vet Tim Tebow, with Los Angeles Chargers play-by-play announcer Matt “Money” Smith and ESPN reporter Maria Taylor serving up color commentary. Each time the contestants run the “Million Dollar Mile,” they have a chance to win $1,000,000. Their biggest obstacle is “The Defenders,” an international team of top-ranked athletes which has but one mission — to stop the contestants from finishing the race and winning the prize.

The series premiered with low numbers (especially considering the ratings of its lead-in), and was pulled off the air after two episodes and was sent to Saturday nights. After two Saturday airings, Million Dollar Mile was pulled again and returned two months later. It seems certain that this series has been cancelled.  I’ll update this page with breaking developments. Subscribe for free Million Dollar Mile cancellation or renewal alerts.

What do you think? Do you like Million Dollar Mile TV series on CBS? Should it have been renewed for a second season?

The show was awesome and a very intense show to watch. Very fun game to watch and to compete.

I’ve watched every episode of Million Dollar Mile , Tim Tebow is an awesome host , they need to bring back this show .

This show could get renewal I guess. I l
Thought the first two episodes we’re good (76% ) C+ show. Than it got taken off for a month and didn’t tell us when or if it was coming back. It didn’t show ad or anything. I just stubble access it 10 minutes left in episode 5. It not on onDaman. So you will have to look up the show by typing it up. So really the rating come down to how long it takes you to realize it was back on.