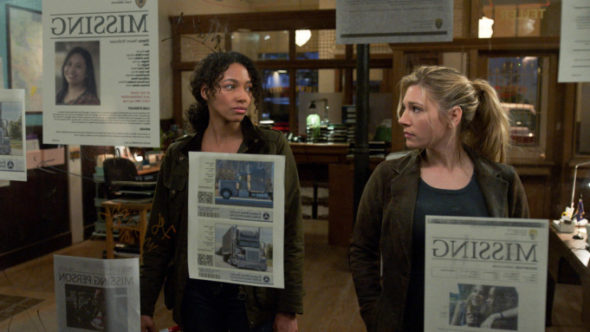 There will be more mysteries and crimes to solve in the 2021-22 network television season. ABC has renewed the Big Sky TV series for a second season. It’s unclear how many episodes have been ordered but the first season has 16 installments and there are three remaining.

A thriller drama that’s based on a series of books by C.J. Box, the Big Sky TV series stars Katheryn Winnick, Kylie Bunbury, Brian Geraghty, Dedee Pfeiffer, Natalie Alyn Lind, Jade Pettyjohn, Jesse James Keitel, Valerie Mahaffey, John Carroll Lynch, and Ryan Phillippe. The story begins with Danielle Sullivan (Lind) and her sister Grace (Pettyjohn) on a road trip to visit Danielle’s boyfriend. The two are kidnapped by a truck driver on a remote part of a Montana highway. This sets off a chain of events that leads private detectives Cody Hoyt (Phillippe) and Cassie Dewell (Bunbury) to join forces with Jenny Hoyt (Winnick), Cody’s estranged wife and an ex-cop, to search for the sisters. When the trio discovers that these are not the only girls who have disappeared in the area, it becomes clear that they’ve stumbled onto something that’s much bigger than they could have imagined.

Airing on Tuesday nights, the first season of Big Sky averages a 0.57 rating in the 18-49 demographic and 3.69 million viewers in the live+same day ratings. It’s the network’s sixth-highest rated scripted shows and does very well in delayed viewing.

There are more mysteries to solve out there under the #BigSky with Season 2! pic.twitter.com/4Aq0u51fkr

What do you think? Have you watched the first season of the Big Sky TV series? Do you plan to watch the second season?

I have watched season1, than went ahead and started watching season 2. I realized there was only 4 episodes, my question is: Has Blue Sky been canceled or when is it on again !!

Definitely will watch the 2nd season

This is the best new show on network TV in years.

Just finished season 1 and watched every episode sitting on the edge of the couch in anticipation of the unfolding events happening in the show. Love it,told all my friends and family not to miss it and from what I can tell there are many more fans of Big Sky. The last episode left me hanging can hardly wait for the next season.

I absolutely love the show!! Can’t wait for season 2!!!

I LOVE LOVE LOVE THIS SHOW! I hope they get a season 3!!

I’m going to be depressed when season one is over next week; but I’m psyched for season 2. Finally a really good show. I LOVE Ronald lol. Best show!

Yes, love the show and its suspense. Will continue to watch.