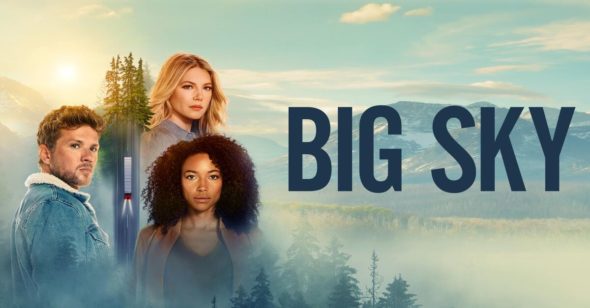 ABC has had a problem finding a successful TV series for its Tuesdays at 10:00 PM timeslot for years now. Will the Big Sky succeed where so many other shows have failed? Will the series be cancelled or renewed for season two? Stay tuned.  *Status Update Below.

Based on a series of books by C.J. Box, the Big Sky TV series stars Katheryn Winnick, Kylie Bunbury, Brian Geraghty, Dedee Pfeiffer, Natalie Alyn Lind, Jade Pettyjohn, Jesse James Keitel, Valerie Mahaffey, John Carroll Lynch, and Ryan Phillippe. The story begins with Danielle Sullivan (Lind) and her sister Grace (Pettyjohn) on a road trip to visit Danielle’s boyfriend. The two are kidnapped by a truck driver on a remote part of a Montana highway. This sets off a chain of events that leads private detectives Cody Hoyt (Phillippe) and Cassie Dewell (Bunbury) to join forces with Jenny Hoyt (Winnick), Cody’s estranged wife and an ex-cop, to search for the sisters. When the trio discovers that these are not the only girls who have disappeared in the area, it becomes clear that they’ve stumbled onto something that’s much bigger than they could have imagined.

What do you think? Do you like the Big Sky TV series on ABC? Should it be cancelled or renewed for a second season?

Please read our comment of Aug. 18th. Still looking forward to the next season.
L and D

Still love to watch BIG SKY and still waiting for the next season.
Please Don’t cancel!
Lynda and Dianne

I def think this series should be renewed for another season at least! The character actors are all fabulous, making each episode fascinating – the lengths that same people will go to, to get what they want!

We love Big Sky look forward to seeing it every week! Don’t even think about taking this show off the air! If you want to keep people watching your channel don’t take it away!!!

Great show and please renew. The two female actors are great together and could handle at least another season.

I love suspense thrillers and Big Sky is AWESOME! Please give some closure to this series and add a second season. The season finale was great but we need answers for closure!

big sky i would love to see a season 2