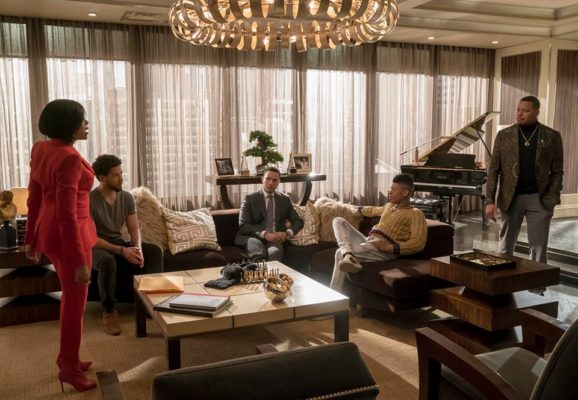 Can the Lyon family get together and draw viewers back into watching their TV show? Has the Empire TV show been cancelled or renewed for a sixth season on FOX? The television vulture is watching for the latest cancellation and renewal news, so this page is the place to track the status of Empire, season six. Bookmark it, or subscribe for the latest updates. Remember, the television vulture is watching your shows. Are you?

The fifth season of Empire on FOX averaged a 1.35 rating in the 18-49 demographic and 4.52 million viewers. Compared to season four, that’s down by 27% and 20%, respectively. Find out how Empire stacks up against the other FOX TV shows.

Will FOX cancel or renew Empire for season six? Though they are down, the ratings are still the strongest of FOX’s shows. Given the state of the rest of FOX’s slate, I have no doubt it will be renewed (despite the controversy surrounding Smollett). I’ll keep an eye on the Nielsens and update this page with breaking developments. Subscribe for free Empire cancellation and renewal alerts.

What do you think? Are you glad that the Empire TV show has been renewed for a sixth season? How would you feel if FOX had cancelled this TV series, instead?

Empire proves to be one of the better TV series offered now. Keep those stars working, including Smollett even though he stubbed his toe. Who hasn’t!

Don’t drop Empire. Good series are nonexistent. Empire proves to be one of the best.

I’m happy it has been renewed and sadden by the decision to make this the last season. I feel the ratings were only on a temporary slump so season 6 it will return to their rightfully earned position.

So upset that Fox is cancelling both Empire and Star….both shows are 2 of my all time faves!!! I look forward to settling in every Wednesday night to watch both…I just can’t believe it!!!

Empire is by far one of the best sitcom’s on television. There are many fans including myself would love to see the show go on…maybe even a regular series. Please listen to the fans! Keep Empire!

In glad they have decided to do a season 6 Enpire and star are my favorites shows so I truly thank you fox.

I liked it in the beginning..it’s just all noise now. The women all act ghetto and sassy..it’s hard to watch it after awhile. I’d like to see it cancelled especially after the Jussie incident. I prefer Power.