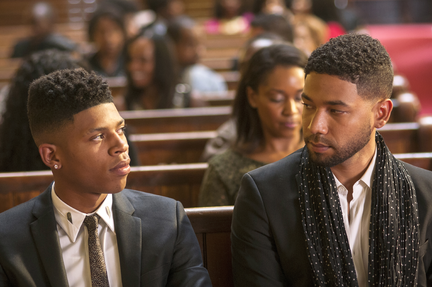 Things are not looking good for Jamal Lyon. According to Variety, Jussie Smollett will not be returning for the sixth and final season of FOX’s Empire.

Smollett plays Jamal Lyon on the music drama alongside fellow cast-members Terrence Howard, Taraji P. Henson, Bryshere Y. Gray, and Trai Byers. Smollett has been absent from the FOX series since earlier this year as a result of legal troubles.

On Twitter, Empire co-creator Lee Daniels confirmed Smollett will not appear in the TV show’s upcoming sixth and final season. Read his post below:

@Variety @JoeOtterson This is not factual. Jussie will NOT be returning to Empire. -LD

What do you think? Do you watch Empire? Will you keep watching without Smollett?

I have enjoyed the series, it’s like a guilty pleasure, I do think it’s fun its course. The storyline, in my opinion, is forced. I do love the chat after of Jamal and his music is inspiring, I do hope.he doesn’t appear even as a ghost!

He should be allowed to show up on thé LAST séries. It won’t be thé same

I am sorry to see the show go!!! I love it!! Not sure what I will do if Jussie doesn’t return, you really need the WHOLE family on the show, because the show is all about FAMILY & I LOVE Jussie’s Music!!

I love empire. And all the cast. I’m not one to judge. Only God knows. I would love to see him on the final season. Love in their shoes. Fame is hard. I am sad to see it go.

Glad to see it leaving the air but it’s too bad it wasnt soon after it premiered because it was a complete waste of TV time and how anyone could watch such hot garbage is beyond me!!! Bye Felicia, wont miss ya one little bit!!!

He’s actually my favorite character on the show. Don’t know if I’ll watch it or not. The show’s dynamics will change. Guess I’ll wait and see how much I’ll miss seeing him. His character adds flavor to the show. How can you take half of some flavoring out and expect it to taste the same??

Why NOT hire him back? It’s the final season after all

i love the show its one of my favorite i never miss an episode, i will continue watching “Empire” i just wished it weren’t the final season

I will miss Jamal. I’m gonna miss seeing him and Akeem perform together. I will still continue to watch Empire.

So glad the producers decided not to rehire Jussie . As much as I liked him in the show, when he pulled that stunt in Chicagothinking it would help his negotiation for a higher paycheck, and then got out of paying for it, he insulted every person in America. It was so wrong…. I think that perhaps to help with the continuity of the show they should recast the character. Last night I thought a good possibility would be the young man who got the Golden Buzzer on America’s Got Talent. He was so personable, had a great voice and… Read more »

I will not watch any show with Smollet in the cast.