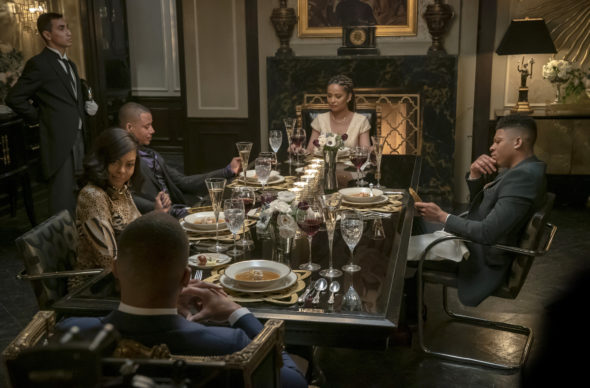 Some bittersweet news for Empire. Deadline reports the final season of the FOX TV show has been cut short.

Instead of ending with episode 20 as originally planned, Empire‘s sixth and final season will now end with episode 18. Production on the final season was recently cut sort because of the coronavirus lockdown Now, the FOX series’ finale will air on April 21st. Apparently, the finale will feature some footage from episode 19, which was halfway through shooting when the lockdown began.

What do you think? Do you watch Empire? How do you want the show to end?

I guess I’m glad Cookie didn’t get blown up.

Though I am sad to see the series end I can respect the desire of the producers to keep everyone safe. The reality is that we are not sure when it will be possible to ‘return to normal’ and the stars may have other commitments. I do feel cheated by the missing two episodes but I am also ok with the images left of a united Lyon’s Family. Of a Cookie and Lucious in a good place with each other and side by side as they belong. I would have liked to see Andre’ and Teri reconcile but I have… Read more »

I think that they should let the episodes air regularly and just finish filming episodes 19 and 20 when the virus over and air those episodes as a series finale 2 hour special.

I think it is bad enough such a hype show is being cancelled, but it is a real kick in the butt to shorten the season. Why not.postpone the finale until safer times or do a finale from each actor’s personal space. Generate a contest on who can guess how the story ends. I feel really let down by Fox.

They need to do some fast re-editing… focus the final episodes on the important stuff like who kills Lucius & Cookie’s likely revenge on her sisters. And stop wasting time with “Bossy” records, Andre’s imaginary conversations with his dead brother, and all these secondary characters who popped up in the last year or so and are just wastes of time.

What they really should have done was brought the main characters from the “Star” spinoff over, just so we know who survived that show’s version of the “Red Wedding”/”Moldavian Massacre”.

I hope they do all 20 episodes and renew. If they have to, just take an extended break until the Corona viruse get it’s butt kick. Be healthy and safe everyone. Good luck to everyone and their families. to all.

This was already the final season so there not going to renew. However I think they should have just waited to film the remaining 2 episodes and air it later in the year to give the fans its proper finale

A former Top-10 ratings juggernaut, and FOX-TV will let “Empire” die on a massive cliffhanger. I think the network is just looking for excuses to get out of giving it a proper send-off, or maybe “Empire”‘s cast and crew are anticipating a writers strike this year. I think long-running African-American shows have always gotten denied proper send-offs for decades (the earliest example was when CBS cancelled “The Jeffersons”; Another example is when “Girlfriends” was cancelled by The CW after the 2008 writers strike because a proper send off was “too expensive”). This is just saddening, and it’s exactly why I… Read more »

This is one of my very very, very. very favorite T. V. Qshows . I am very.very,very very,very ,very, very very very sorry that it is ending. It is one of the few shows that I tape and watch aagain and again . I am really going to miss it… It is special to because when the show first came on my late fiance” & I would watch it. We enjoyed the stories, plots music fashion, and emotions it displayed and described . A great loss to television… The actors and actresses are superb !The acting was as if it… Read more »

No empair is a good tv show. Tjis is the only show i watch on thuesday. They take star off from tv. Both empair and star is my favorite tv show. Please keep empair on tv