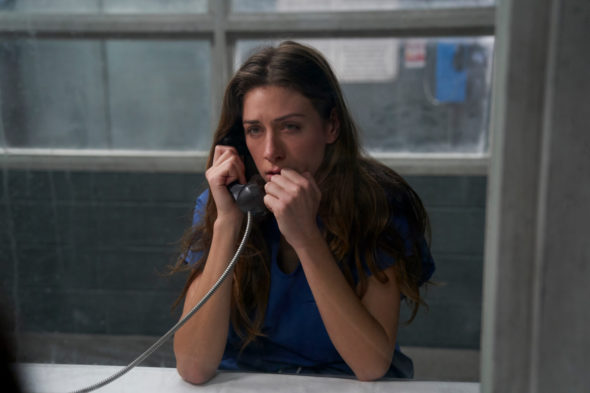 It looks like Murphy’s story is coming to an end this summer. The CW has cancelled the In the Dark TV series ahead of the show’s upcoming fourth season premiere on Monday, June 6th.

A drama series, the In the Dark TV show stars Perry Mattfeld, Brooke Markham, Casey Deidrick, Keston John, Morgan Krantz, Theodore Bhat, and Matt Murray. In the series, Murphy (Mattfeld) is a messy twenty-something who struggles on a daily basis to balance her random hookups, her hangovers, and her drug front. She’s also blind. In season three, Murphy and her best friend, Jess (Markham), along with their annoying friend Felix (Krantz), and Murphy’s ex-boyfriend, Max (Deidrick), find themselves faced with yet another dilemma – how to avoid getting caught for murder.

Regarding the cancellation, The CW is currently owned by CBS Entertainment Group (part of Paramount Global) and Warner Bros. Entertainment (part of Warner Bros. Discovery). Most of The CW’s programming comes from these two companies and network ratings are only a part of how they profit from the shows. In the past, The CW has been renewing most of its shows each year but, the network is currently up for sale. Because a sale will change how The CW operates, the network has significantly pared down its renewals this time around and has opted to cancel several series that likely would have been renewed in past years.

It’s unclear at this point if there’s a possibility that In the Dark could be revived for a fifth season if the upcoming episodes generate enough interest. Past seasons have typically drawn low traditional ratings on The CW.

What do you think? Will you be watching season four of the In the Dark TV series? Are you disappointed that the show has already been cancelled?

How can they cancel it now!? That can’t be the end! I’ve been hooked since I discovered it and season 4 was the best yet. I have multiple friends turned onto it. There has to be at least one more!

I need to know where Murphy and Felix are headed? Does she get away with it? How was there no scene of the cops finding the body at the end? So many questions and a terrible way to end the series indefinitely. Murphy got her closure. I need mine!

I loved In The Dark & am recommending it to all my friends. Please continue it♥️

In the Dark and Roswell were my 2 favorite shows. I watched them every week and never missed an episode, and both just got cancelled. They’re both very well written, excellent actors, and have a good meaning behind the story line. I hope they bring both back sometime in the future.

Please, please do not cancel this show!!!!!